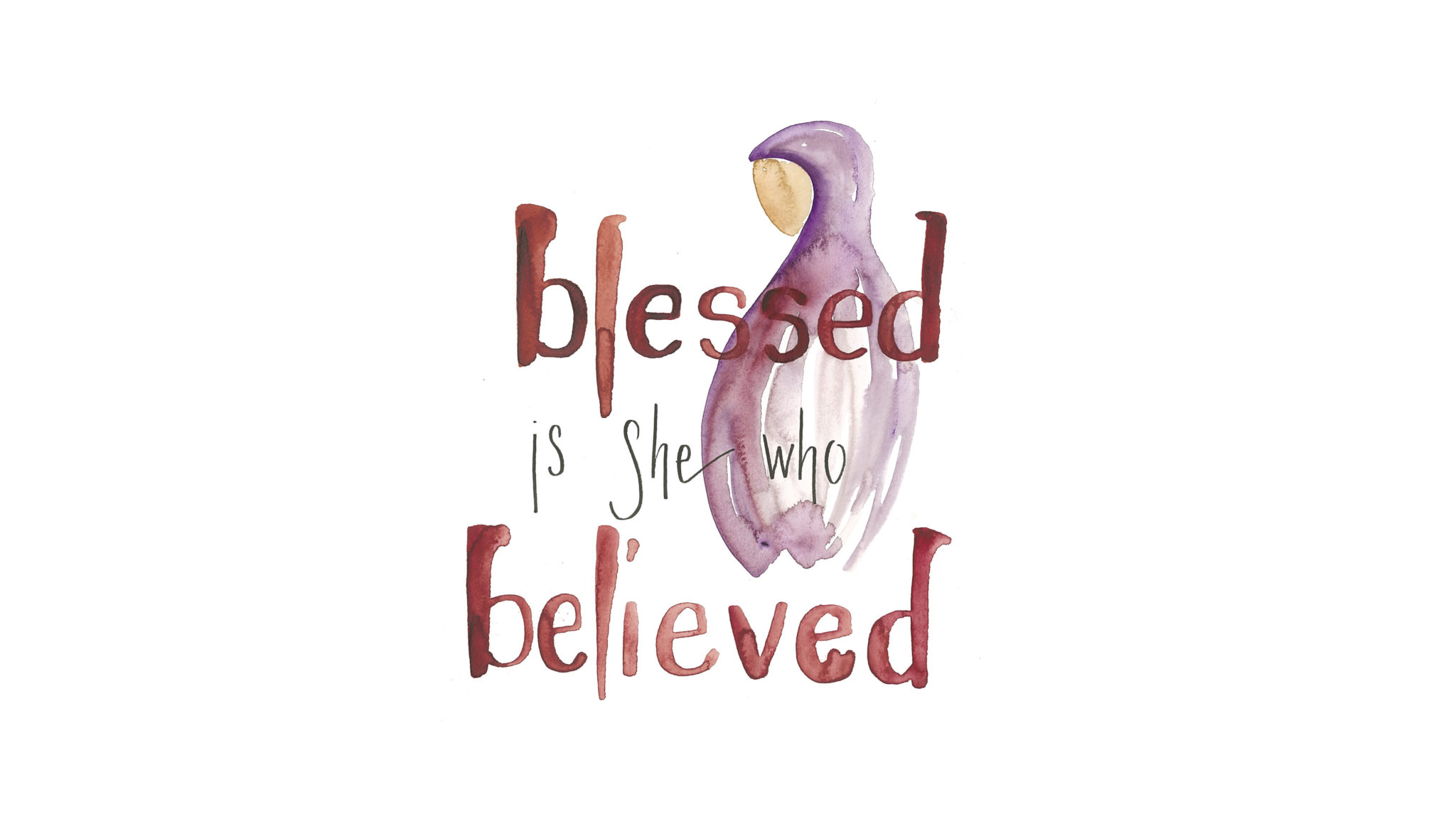 Elizabeth and Mary: Called to Encourage

When Mary and Elizabeth meet, the Spirit inspires them to more fully understand God’s action in their own lives and in the world. Their encouragement and support for one another leads to some of the most beautiful words of praise to the Lord in Mary’s Magnificat. This Bible study explores the parallel stories of Elizabeth and Mary in the Bible, as told in Luke 1:39-56.

Holy God, as we open your Word to study Elizabeth and Mary, open our eyes to see you, our ears to listen for you, and our hearts to perceive the ways you are at work in us and in the world. Amen.

Introduction to Mary and Elizabeth

In the opening chapter of Luke, not one, but two women of faith experience miraculous pregnancies. We meet Elizabeth first. She is the wife of Zachariah, a priest, and we are told “both of them were righteous before God, living blamelessly according to all the commandments and regulations of the Lord” (1:6). Yet, they had been unable to have a child until the Lord intervened.

Around the same time, unbeknownst to Elizabeth, her young relative Mary has also become pregnant through the Lord’s intervention. The angel Gabriel announces to Mary that she has found favor with God and explains the Lord’s plan for her and the son she will bear. When Mary is understandably astonished, the angel tells her about Elizabeth’s unexpected pregnancy, presumably to reassure her or confirm the possibility of such a miracle. At this news, she answers, “I am the Lord’s servant, may your word to me be fulfilled” (1:38). After the angel leaves, Mary immediately sets out to see Elizabeth.

Digging Deeper: Mary and Elizabeth in the Bible

It is unclear how well Mary and Elizabeth knew one another before this meeting recorded in Luke 1:39-56. Presumably Mary lived near Nazareth, and Elizabeth lived near Jerusalem where her husband worked in the temple. But whether they are close or more distant relatives, their shared experience seems to quickly draw them together. Elizabeth instantly and prophetically knows what has happened to Mary. As soon as Mary greets her, she is filled with the Holy Spirit and exclaims, “Blessed are you among women and blessed is the child you will bear!” Elizabeth blesses Mary with the same blessing Deborah, the judge and prophet, once pronounced of the brave and bold Jael (Judges 5). Mary is blessed for believing the Lord’s promises. In this way, Elizabeth’s words anticipate Jesus’s blessing of those who hear the word of the Lord and obey (Luke 11:28). She encourages Mary by celebrating her faith as well as her role as mother of Jesus.

In the same breath, Elizabeth speaks of the child still in Mary’s womb as “Lord”—the Bible’s first Christological confession! Before any of his miracles or teaching (or even seeing Jesus in the flesh), Elizabeth responds to the question he will later ask his disciples: “who do you say that I am?” (Luke 9:20). She calls him “Lord,” the same word she has just used to speak of God. In Elizabeth’s womb, the one who will grow up to become John the Baptist leaps for joy as the Holy Spirit comes upon his mother, the first to point to Jesus’s identity as the Lord, the God who saves.

Elizabeth’s prophetic exclamation of the truth about Mary and her son seems to further encourage Mary who is preparing to be the “servant of the Lord” (1:38). Others who have held this honorary title include Moses, Joshua, Abraham, David, and many prophets, including Hannah. (According to Jewish teaching, Hannah is considered one of the seven prophetesses of the Hebrew Bible, that is, the Old Testament.) And, in response to Elizabeth’s words, Mary speaks in poetic verses (as so many prophets do), a song reminiscent of Hannah’s prayer in 1 Samuel 2:1-10. We often refer to this song/prayer as “The Magnificat” because it begins with the words, “My soul magnifies the Lord and my spirit rejoices in God my Savior” (Luke 1:46-47). In response to what the angel has told her and encouraged by Elizabeth’s prophetic recognition of God’s work in her life, Mary celebrates what God has done and will do “from generation to generation.”

Can you imagine the energy and excitement in the room as these two women share this inspiring Spirit-filled moment together? The Lord is at work in each of their lives, and they name it out loud for each other, like sparks flying back and forth between them. “Blessed is she who has believed that the Lord would fulfill all his promises to her!” (1:45). These two women have faithfully believed and now they help one another recognize God’s action in their lives through their shared experience of pregnancy. And in that moment of encouragement, the Spirit inspires them further to declare the Lordship of Christ and to celebrate God’s good deeds to all God’s people! These magnificent words echo through the generations to inspire and encourage us all.

She Is Called and We are Called

We often hear the various parts of this story in isolation from each other. Perhaps during Advent, we hear the Magnificat sung or read, or we’re likely to hear the angel’s announcement to Mary and her response, “I am the Lord’s servant.” Yet, it is important to remember that the Magnificat does not immediately follow from Mary’s response to the angel. Rather, it comes after she runs to Elizabeth who, by the power of the Spirit, sees the significance of what is happening to Mary and celebrates her faithfulness in it. Elizabeth’s prophetic role calls forth Mary’s song of praise which itself echoes prophecies of old. In this brief episode, both of these women are called to speak God’s truth, and when they do so, they encourage and inspire one another—and us besides.

Though of course we don’t know all the details of their relationship, this story invites us to imagine Mary coming perhaps to offer her help and support during Elizabeth’s pregnancy as well as to find reassurance of the truth of the angel’s words to her. We can imagine Elizabeth taking on the role of a wise mentor who sees God at work in her young niece’s life and names it. She reminds Mary that she is blessed, not just because she bears this child, but because she is a young woman of faithfulness. Mary receives this encouragement and is empowered to declare the word of the Lord with boldness and beauty, living into her calling as a “servant of the Lord.”

How might we each be called to play both of these parts in our own relationships: helping and supporting one another, identifying God’s work in the lives of others, encouraging one another and allowing the encouragement of others to inspire boldness in our own faith?

Though Mary declares herself the Lord’s servant after the angel announces Jesus’s birth to her, the prophetic words of her relative Elizabeth seem to further confirm this miracle to her and inspire her to celebrate it. Following Elizabeth’s declaration of the Lord’s work in her life as a blessing, Mary responds: “My soul magnifies the Lord and my spirit rejoices in God my Savior…” This story reminds us that encouragement is a Spirit-inspired gift we can offer others. And it prompts us to contemplate how our encouragement of others might bring praise to the Lord.

Rev. Dustyn Elizabeth Keepers is a Ph.D. candidate in Systematic Theology at Wheaton College Graduate School. Her current research centers on John Calvin, ecclesiology, and feminist theology. Dustyn is also an ordained minister of Word and sacrament in the Reformed Church in America and previously served as a pastor at North Holland Reformed Church in Holland, Michigan.