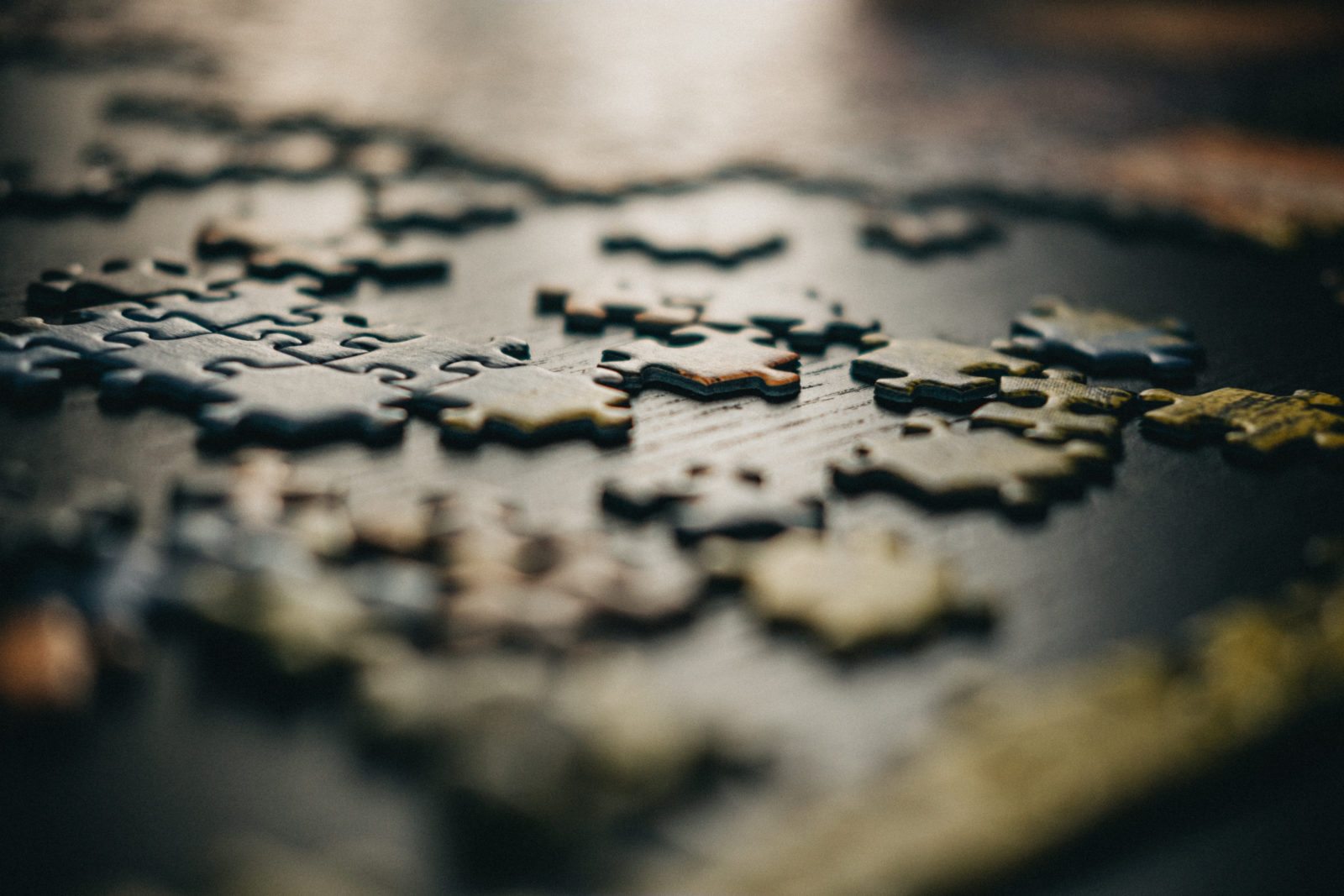 How (and Why) I Learned to Love Puzzles

By Beverly SullivantNovember 6, 2019No Comments

My friend Christopher has a disability. And his disability affects him every day of his life. But assuming his disability means that he needs a wheelchair would be wrong. Just because the wheelchair is the universal sign for disabilities doesn’t mean it’s the “go-to” method of accommodation for all people with disabilities.

In fact, if I asked Chris what he needs, he’s more likely to tell me he needs something to eat, a newspaper, a jigsaw puzzle, or that he wants a cold bottle of O’Doul’s (his favorite). And, since I want to show that I am really listening to his needs, I’m likely to give him one of those needs or desires.

Probably not the O’Doul’s. Probably the puzzle. Just to make sure he knows I’m listening.

Listening to accommodate oneself to the needs, dreams, or wishes of another was the essence of a talk I heard recently. I was at a denominational meeting of ministry leaders from the Reformed Church in America and a professor from Fuller Seminary gave a great talk on listening.

One way this professor, Scott Cormode, homed in on the need to listen in order to accommodate to another person was by telling us the story of wanting sons (who would play basketball with him) and getting girls instead.

Cormode really wanted to play basketball with his kids. But his daughters weren’t interested in sports. So he did the next best and only essential thing he could. He listened to his daughters. And in listening to them, he learned that they would rather talk about fashion, knitting, and cooking.

When I heard Cormode rattle off the list of areas of interest of his daughters, I thought, “Oh yeah. Everybody thinks of fashion and knitting and cooking when they think of females.”

And, just as I was starting to drift away from what he was saying, Cormode pulled me back. And it was great. Great because he proved his point by flashing up on the screen next to him an image of the kind of dress one of his daughters like to sew: a sheath style dress in cobalt blue with a boat neckline and three-quarter-length sleeves.

Wow, I thought, he really does listen to his daughters and absorbs their interests.

And, then, I thought, Do I listen this well? Do I truly pay attention to the needs of others, especially the needs of those with disabilities, in order to accommodate myself to them?

And this is when the image of my friend, Chris, who loves a cold O’Doul’s, came to mind.

Chris, who is 34 years old, has lived with Prader-Willi syndrome his entire life. The main marker for Prader-Willi is hunger. A constant, never ending, never satisfied, hunger. Chris is always hungry and always thinking of the next thing he can put in his mouth, hence the interest in beer.

But I’ve spent enough time with Chris to listen to some of the other things he might be interested in. Chris likes newspapers and he likes bowling. He likes dogs, especially his dog, Codey, and my dog, Scout.

Chris is also an honorary member of the local volunteer fire department, of which his dad is a member. In fact, on Chris’s 30th birthday, the department hosted a huge party for him and presented him with a special plaque to recognize the many, many years of faithful attendance at meetings, fundraisers, and actual fires that Chris has dedicated himself to.

And, I’ve learned from knowing Chris for nearly ten years, he loves jigsaw puzzles. Loves them. In fact, jigsaw puzzles fascinate Chris so much that, I believe, he actually forgets about food for the duration of the time he’s working on one. He becomes so completely absorbed in putting a puzzle together, first the edges, then the sections in the middle, then all the rest, that an hour can elapse without anyone hearing Chris mentioning something to eat or drink.

There must be something about the engagement of a jigsaw puzzle that helps the hunger response in Chris’s mind settle down and be quiet for a while.

At some point in these years of knowing Chris, it occurred to me that the very same distracting of the brain that puzzles offer Chris could be useful to me. There are times when the anxiety of the myriad obligations I have in my life make it hard for my mind to become quiet and focused.

So, a couple years ago I started asking for jigsaw puzzles, smaller ones, 350 to 500 pieces, as birthday gifts. I often have a puzzle in the works somewhere in the house available to me when I feel tense and overwhelmed. Working on finding shapes and colors and images that go together does the trick. I am unwound. I am freed, again, to face the challenges at my desk and on my computer.

My favorite puzzle? It’s got lots of dogs. Beagle dogs, just like my dog Scout. And when I’m completing the puzzle, Scout is usually sitting on a chair next to me or on the carpet warming up my feet.

And, as I’m doing the puzzle, I usually think of Chris. And, as I think of Chris, I am reminded of the many ways in which he taught me to enjoy the greater things in life. In listening to Chris, and in accommodating myself to his needs, I have learned a lot about him, about his disability, and about myself.

Hmmm. I think I might have an O’Doul’s. And, raise my glass to Chris … and to listening.

This post originally appeared on The Network, a blog of the Christian Reformed Church in North America.

Beverly Sullivant is pastor of the Reformed Church in Kinnelon, New Jersey