It Looks Like Chaos, but There’s Holiness in Here

On the surface, we’re not a dignified or very functional church. We’re more likely to call an emergency meeting about bed bugs or behavior problems than about replacing the carpet.

When the Bellevue Reformed Church music team starts playing, there may be only a dozen worshipers scattered through the sanctuary (big enough to seat 300, so our 100-odd worshipers don’t worry about finding a seat). Lots of other people are in the building well before 10:00 a.m.—doing last minute preparations for Sunday School, getting coffee fellowship ready, or just connecting with each other with a blithe disregard for time. But worship begins.

Over the next half hour, people hurry in or meander, limp or are wheeled in. Chuck has a spot for his wheelchair back by the sound booth now; he used to be parked in the center aisle beside the second row from the front, where he always sat before his strokes. But one Sunday, Kiara, Zarayah, and Damarius ran up to talk to him during worship more than usual, and it occurred to Chuck that his grandchildren might be a distraction. Since then he’s stayed in the back.

Several kids, teens, and young adults have dibs on the last two or three rows in the back on the left side—although they graciously moved up a row when a family from Guyana chose the very last pew the first time they came. Tara and Lisa sit by the windows two-thirds of the way back on the right side, which is a little inconvenient when Corey runs up to the front and has to be chased down. (They began taking care of him when they realized his mother was overwhelmed; Corey’s grandmother told them she likes it that they take him to church. Magical thinking, I suppose, but who knows what a toddler might receive in this space?)

A child will light the Christ-candle and often just stand there, looking at the flame as if hypnotized while we wait, and eventually, after a whispered reminder from Rosanne, extinguish the flame on the lighter. The child then goes to the podium, briskly taps the microphone, and says some version of “We light this candle to remind us that Jesus is here with us. Amen.”

A young person will read the call to worship and a string of people will line up with “announcements about our common life,” at least one of which is certain to be “another BRC eating opportunity,” our being especially fond of those.

Then we’re invited to greet one other (or let the bedlam begin). People move all over the sanctuary, some children dodging around legs, others hugging gleefully and indiscriminately. Eventually the kids sit on the stairs in the front for the children’s message, throughout which Jayanna’s hand will be raised (and if all goes well, will be ignored). Since she was two, Jayanna has always had important things she would like to say. And we’d really like to hear them, if only there was an easy cut-off point.

David makes sure never to arrive until the sermon begins; music irritates him. He sits behind Bob, who leans forward listening intently, smiling through all the singing and the liturgy and the entire message. Joel too, if and when he comes, will arrive late and wearing a stack of at least three “Jesus is my boss” hats of varied colors. (He buys these in quantity and gives them away.)

Strangely, it’s almost always quiet during the sermon. I don’t think that’s only because it requires careful attention, being intellectually stimulating and challenging. We do have some teachers among us, two engineers, two firefighters, and an architect, but the nuances of parts of the sermon may well be beyond most of us. (We always pray for the Holy Spirit’s help before the message begins, and we mean it.)

Then, after all these appetizers, we have the main course: communion.

Rich, who’s the pastor and my husband, holds up the round whole wheat loaf we all enjoy so much. He tells us about the night Jesus broke bread and gave it to disciples who were going to betray and abandon him. He says that we can give Jesus our messed up lives, and Jesus will give us his life.

All of us who possibly can, stand and move into the middle aisle. We form a long line stretching all the way back to the narthex. Some of us are quiet and reflective. Others, usually farther back, are chatting. There’s often some giggling somewhere. We move forward. When we get close, we cup our hands and hold them out for the bit of the loaf Rich will tear off and place in them: “The body of Christ.”

One of our Janets puts her hands together over her bit of the loaf and raises them in a triumphant gesture, fighting tears.

Anyone carrying a child stops for Rich to place a hand on the child’s head and give a blessing. Any child reaching out for bread is given Bread. Juice, too; our carpet is a mess.

The line divides because we have two servers holding trays of tiny glass cups. Some people sit down in the front pews while they eat and drink. Others stand off to the side with their eyes closed. Still others pop the bread into their mouths and do a quick bottoms-up with the juice. June, a small feisty woman in her eighties, who frequents our little thrift store, kneels painfully beside the baptismal font. Arthur, a young adult who has survived trouble unimaginable to most of us, lies prostrate behind the pulpit.

When we’ve all been fed, we stand to sing one more song and to receive the benediction.

You are the salt of the earth. A city on a hill cannot be hid. Now go in peace to love and serve the Lord.

Sharon enjoys being great-grandmother in a colorful mix-and-match family. That family and the homeless women she lived with for 26 years as housemother for the Next Door shelter in Kalamazoo, Michigan, provided a spiritual formation she’s so glad to have had. Presently she’s reveling in being Rich’s partner as he pastors Bellevue Reformed Church in Schenectady, New York. 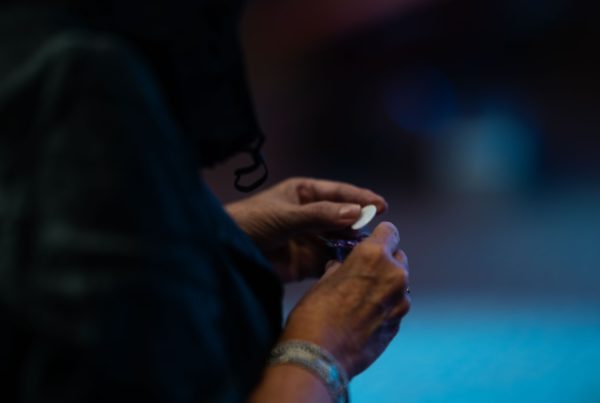 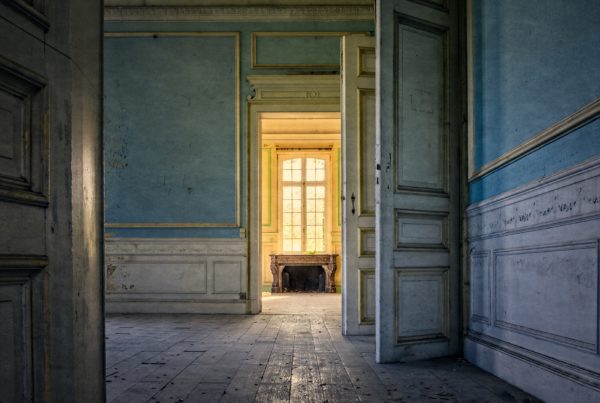 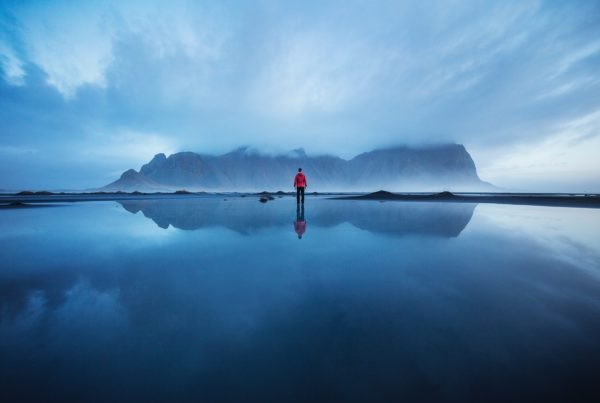