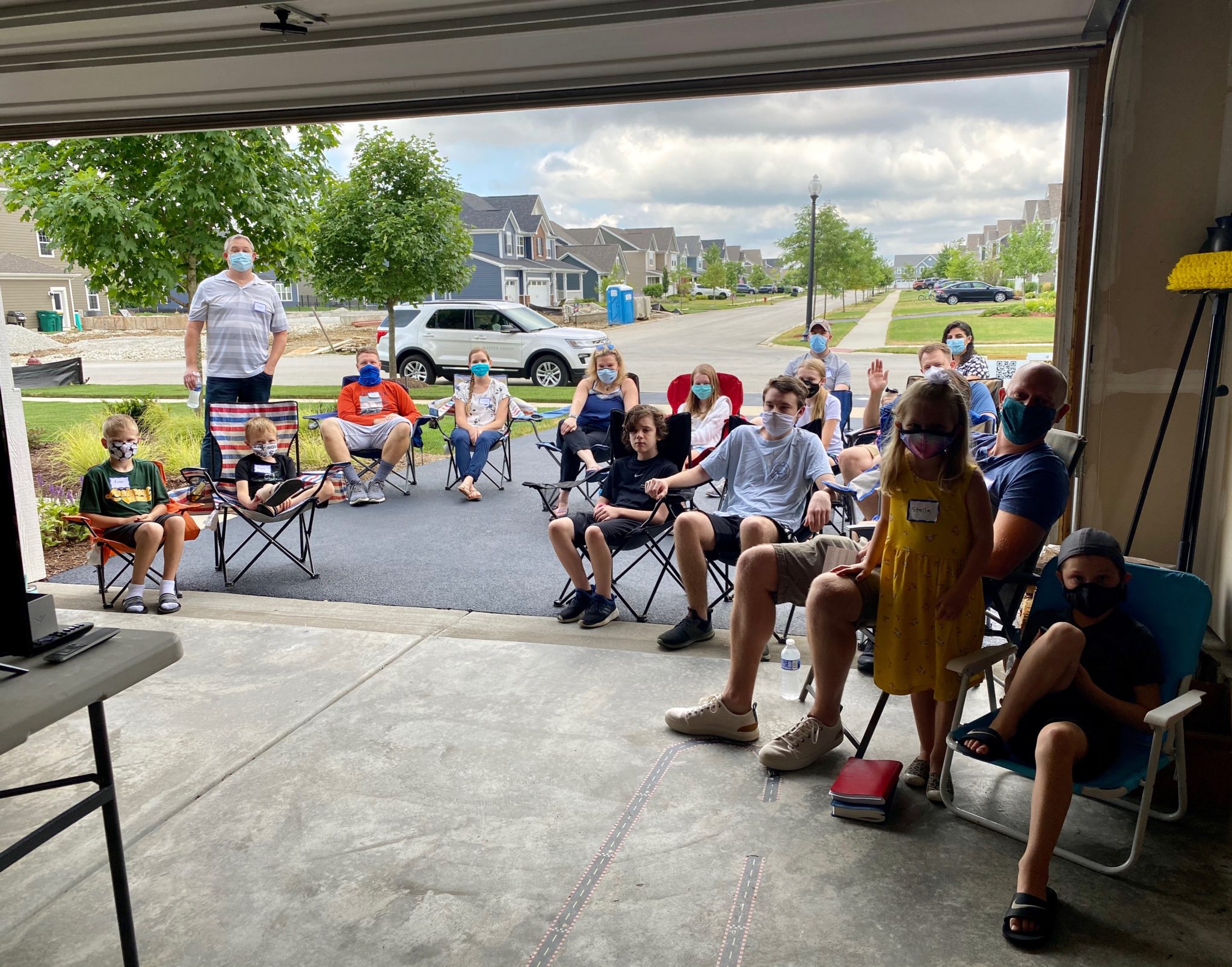 Pivoting: Discipleship in an Age of COVID-19

By Chris Thompson and Andrew BossardetNovember 19, 2020No Comments

When Illinois went into pandemic lockdown in March, Christ Community Church started worshiping online. When fatigue set in, they moved to a house church model. Small groups were formed with 15 people from the church, leaving room to invite neighbors or friends. These “outposts,” as they are called, meet in garages and backyards. Groups watch the worship video together, pausing it to have discussion.

A few months in, next gen pastor Chris Thompson talked with his coach, Andy Bossardet, about how it’s been going. This is a condensed version of the conversation and has been edited for clarity.

Several months after the conversation between Chris and Andy, Christ Community is mostly worshiping in person and online. Several outposts continue to meet, and many of the rest stay in touch to share prayer requests and support each other.

Andy: We’ve talked quite a bit about the shift that the church has been making and this movement toward the outposts model. Can you tell us a little bit about the outpost model and how that came to be?

Chris: Essentially, it’s a small group of people. We’ll get you a TV, a soundbar, a folding table, whatever you guys need to get together and do church in your driveway or your backyard or wherever you want to do it. Then just be a good host; be as hospitable as you can to a group of people who are feeling stressed. This might be their one sort of social outing for the week.

Let’s keep it to about 15 people from our community and leave room for about 10 more people from our neighborhoods or workplaces, whoever it is that we can invite to be here and be with us. It was a real opportunity for us to help our people learn how to do both discipleship and evangelism. So that was kind of the heart behind the outpost: trying to fill a need that a lot of people had in their life with being as safe as possible. 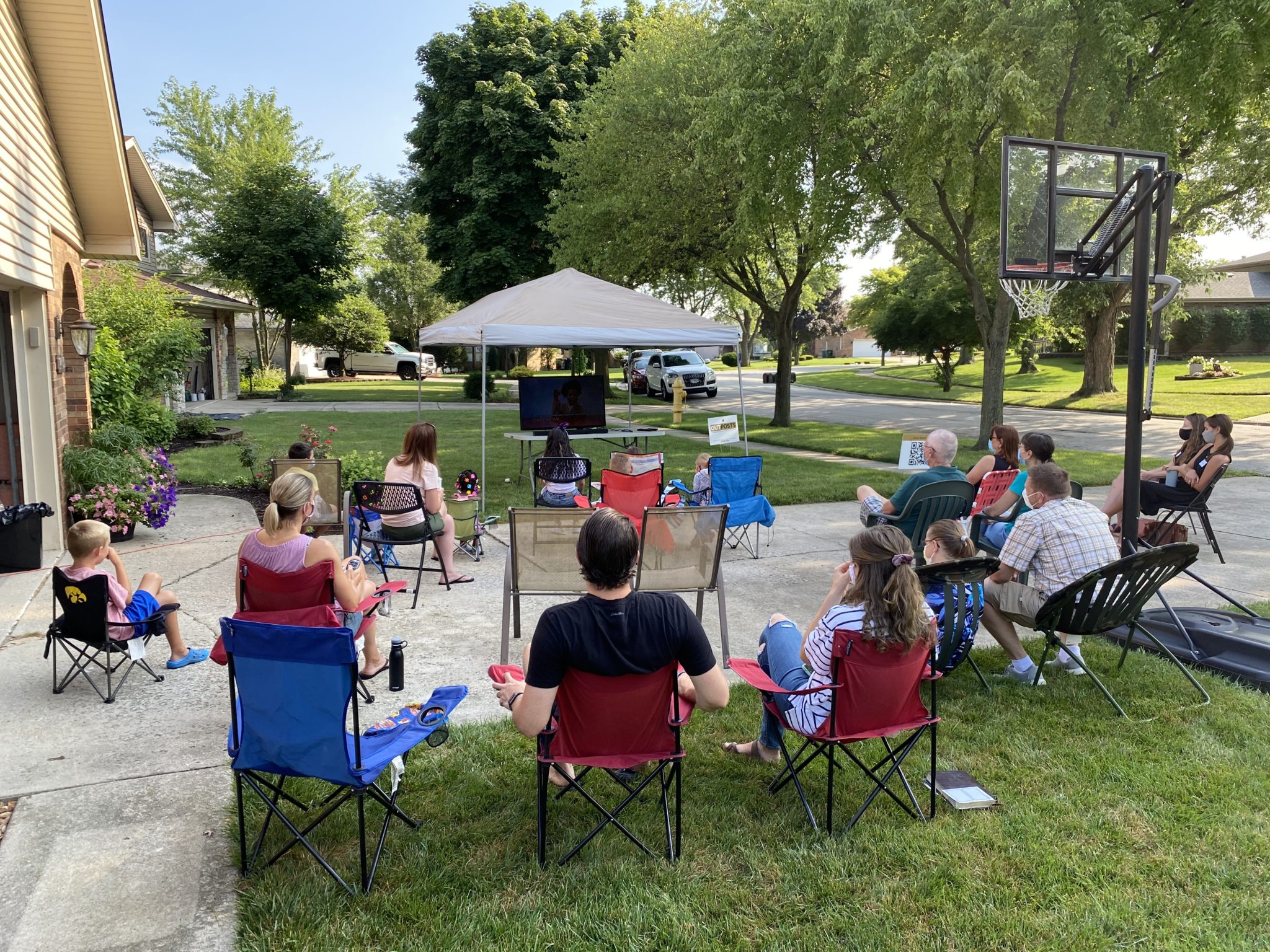 During the COVID-19 pandemic, Christ Community Church started meeting in “outposts,” small groups that meet in driveways or backyards to do church together.

Seeing that their neighborhood is getting smaller—connections are a lot cooler, watching text group communications with anywhere from memes and hilarious things happening to “Hey, my grandma found out that she has a brain tumor and I would love for you all to pray for us.”

We’ve seen people invite their neighbors, or at least have a conversation because they either have a sign out in their front yard or have invited them. We’ve had people that have been disenfranchised or stepped away from the church for a long time and are very mistrusting of the church as an establishment, want to come and hang out at their neighbor’s house because they need community just as much as anybody else.

One of the biggest things is we’ve seen people step up in some pretty significant ways. People that stepped up to be leaders were like, “We will make it a priority.”

You mentioned people inviting their neighbors. Do you have any stories or any indication you can give me of how that’s working? Are neighbors connecting?

Not gonna lie, it took a little while because it’s just a muscle that, for the most part, churches don’t flex really well. It’s not a muscle that we work out. When we get done, that was painful, you know, like running for 10 miles when you’ve never run two miles. Then you wake up the next day and you’re like, “Oh my goodness.” There was some of that when we started. But once people started doing it, and they got that first moment of “Yeah, maybe, I think I will show up.” That takes some of the sting out of it.

One lady tells a story of her next door neighbor. The wife and mom in the household said, “Yeah, I’ll be there. I don’t know about my husband or high school–age son, but I’ll be there.” Part of it was, her husband and her son have some past hurts from the church, and she really wants to be a part of a church but doesn’t want to go alone on a Sunday. This was the opportunity to walk across the street and be with her. That first week, her husband and her and her son came, and the next week, and they’ve been there every week now for five or six weeks.

There’s just so many barriers that have been broken down for our neighbors. We literally just have a TV set up on a folding table, and we’re sitting in some camping chairs with our Dunkin Donuts coffee or whatever people bring. That’s refreshing for a lot of people that have either past hurts or have never been a part of the church before that would never set foot inside a church building.

I know that you are pretty intentional in trying to map out what discipleship can look like in an outpost. What are you seeing in terms of discipleship, first of all, and what is some of the fruit you’re seeing even early on?

Everybody’s kind of vulnerable with each other right now; that leads itself naturally into these moments of discipleship.

One of the craziest things that we can do is have just an open time of prayer with each other, and you as a leader just practice some vulnerability. You’re setting the tone for what discipleship looks like in your community by how you represent yourself. If you’re going to be willing to be vulnerable with people, people will be vulnerable back with you. A lot of our discipleship has been through prayer and sharing a testimony.

We’ve done some intentionality in our actual service of asking specific community questions where we have the group pause and actually talk for a little bit, either based on something fun that we do at the beginning or a question that [teaching pastor] Chad [De Jager] has in the midst of the service. For the most part, anybody who is a part of faith or doesn’t have faith could answer the question. We did a sermon on Sabbath; what we asked people in that service was “Where do you find rest?”—not “What would your Sabbath practice look like to reconnect with God?” Some of the outposts had people that wouldn’t call themselves faith people; they answered that question differently, but they were willing to be open and vulnerable.

To make the shift to outposts, what did you have to talk about as a leadership team? Staff, consistory—how did those conversations look?

Most risk is a hard thing. It was really beautiful to watch our community be able to risk it and see a lot of fruit from it already.

The worst we can do is try, and if it fails, we go back to the drawing board. Consistory was really on board with it, had a lot of questions, obviously, because that’s kind of their job to help you think through all the intricacies. Staff was just curious, like how do our jobs function in this? We actually rewrote quite a few of our job descriptions.

It was a lot of work to begin with. It was a little awkward. But it’s grown into this thing where people just genuinely love each other. They’ve got newsletters that go out for their outposts every week, you know they’ve got text message chains, they’ve got regular check-ins with people that they didn’t know were even in their neighborhood. It’s been so beautiful. It’s made the church a lot smaller in a lot of ways.

The church in the U.S., at least, has operated for so long about getting as many people as possible into the same space at the same time, whether it be Sunday mornings or other types of ministry in the large group; getting the critical mass has been so big. And you’ve kind of flipped that on its head by saying, “We’re going to intentionally focus on gathering people into as many small groups as possible.” As you said, that rewrites job descriptions. What does it look like for you in your particular role as a next gen pastor?

For the longest time, I’ve operated in this role of “get as many students as you can together and hang out. Have a good time, grow in your faith, so on and so forth.” The way in which my role has changed—and I think Chad’s role has changed and so many other people’s roles have changed—we’re dispersing the professionalism that’s come to so much of pastoral ministry and giving it back to the people.

We now have people that have become de facto youth leaders. Students were just matched with everybody else. Everybody else treated them as adults, not as this separate group.

In some ways, it’s my job now to help leaders recognize the power and potential of the students that are a part of our community and help them see that, yeah, they’re not just students. They’re actual people who have interests, similar to you; have struggles, similar to you; have prayer requests, similar to you. And so just love on them. At the end of the day, that’s really all youth ministry is, right? Forming relationships and loving students. We can do that in a large group, and we can do that in a small group at outposts, too. 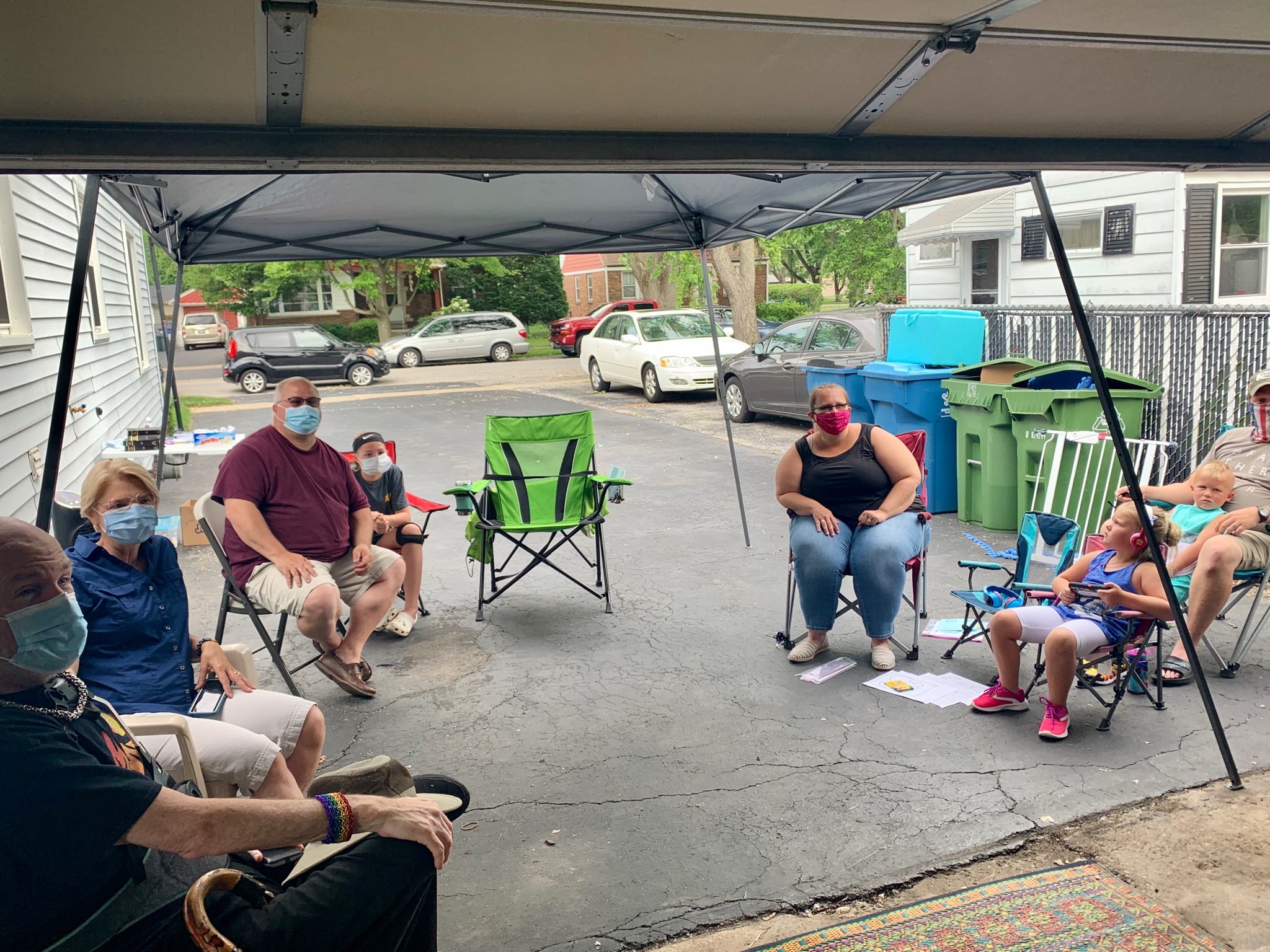 “It’s grown into this thing where people just genuinely love each other. … You know they’ve got text message chains, they’ve got regular check-ins with people that they didn’t know were even in their neighborhood. It’s been so beautiful. It’s made the church a lot smaller in a lot of ways.”

One of the things that you mentioned earlier and I want to come back to is that it takes a lot of the professionalism out of the church, and all of a sudden, people have to lead for themselves. How do you prepare people? How do you train people to lead an outpost?

All of us on staff make it a regular priority to check in with them. I spend a lot of that just helping people think creatively, because they are amazing. They’re so much better at being pastors than they think they are, from a standpoint of just caring for people. And it’s amazing how encouragement and being present and just keeping your eyes open and asking for their own stories of how things have been going are huge motivational factors for them to just keep trying, keep experimenting, keep processing, and just keep growing.

Last question for you: how do you think this is going to change the ministry of Christ Community, long term, past the ice age?

But I wonder—and what I’m hoping happens is we all recognize what happened when we did something the same way for so long. I don’t know if just getting back on the same ship is the thing that we all want to do again, especially after we’ve learned how to survive and we recognize we found an island that was beautiful and we started building a new civilization on it. We don’t want to get back on the boat; we like where we’re at and this is different, this is beautiful, this is great. For some people, it might be getting back on the ship again. My hope is that we can diversify the way that the church looks, and the way that it feels, and the way that it presents itself to the world.

Chris Thompson is next generation pastor for Christ Community Church in Lemont, Illinois. 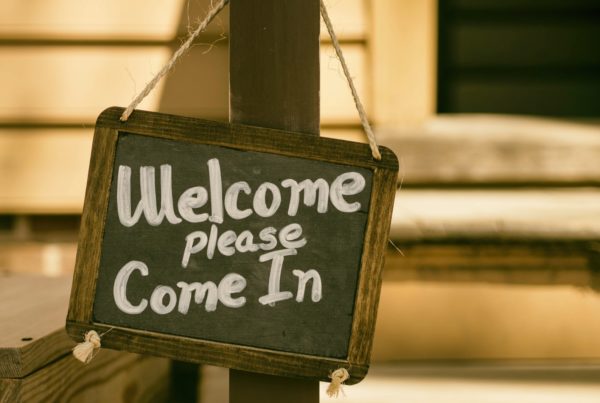 Are Churches Actually Welcoming to People with Disabilities? 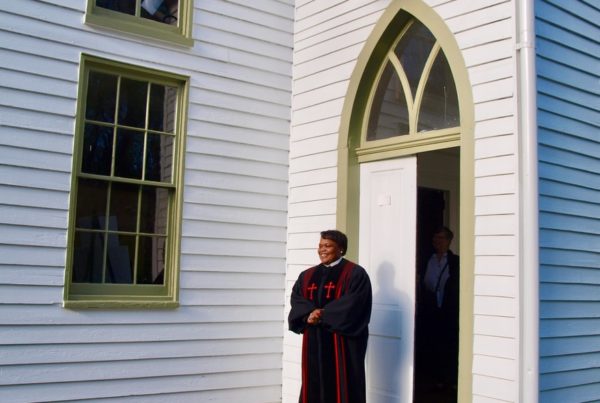 Pastoral Transition Survival Guide: How to Navigate a Pastoral Search and Transition 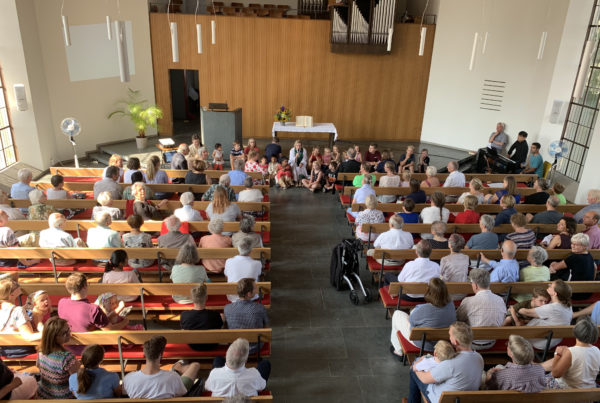