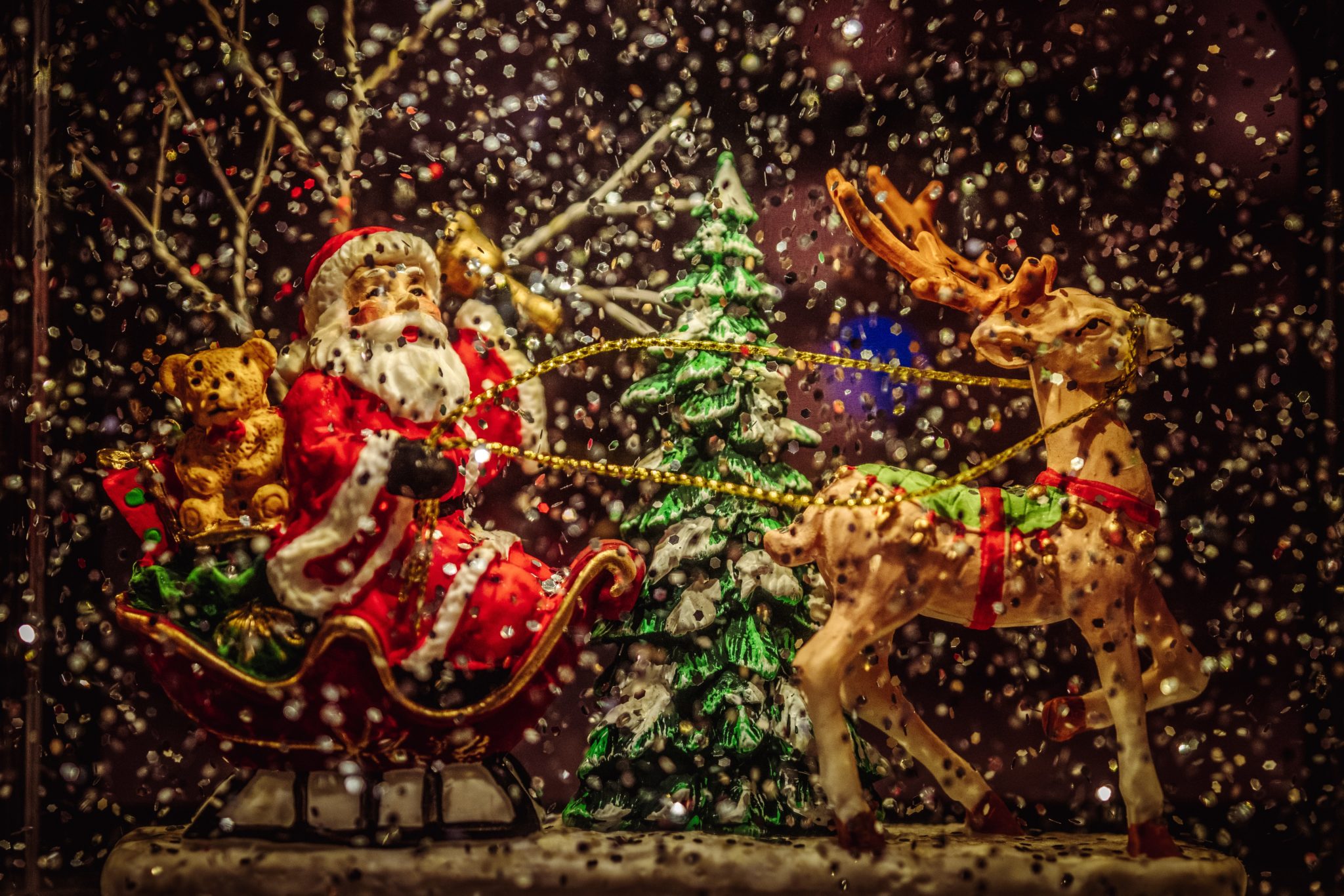 Christmas and Santa Claus. In the U.S. they seem inextricably bound…to many Christians’ dismay. Our “right jolly old elf” somehow serves too easily the American god of consumerism, and we wonder whether Christmas would be better without him, and then feel like Scrooges for suggesting such a thing. However, hope for a richer Christmas may lie not in Santa’s banishment, but in the revitalization of his far nobler ancestor, St. Nicholas, or Sinterklaas, as he was known to the Dutch settlers who brought him to America. St. Nicholas is a real and ancient saint of the Christian church whose feast day is December 6.

The man who became St. Nicholas was born some time in the middle of the fourth century in what is now Turkey, and little is known about him. He was an abbot known for his piety and benevolence, and he became archbishop of the metropolitan church of Myra. He was imprisoned for his faith under the emperor Diocletian, was released by Constantine, and is thought to have been present at the Council of Nicaea. His bones were preserved with great honor at Myra until the end of the eleventh century, when merchants carried them off to Italy. There they remain in the Church of San Nicola at Bari, where pilgrims still come to pray.

The facts about St. Nicholas may be sketchy, but legends abound. Two of the most famous tell of the bishop’s special protection of young women and children. There was in Myra, it is said, a nobleman who had three daughters. However, the man was so poor that he had no dowries for his daughters, and he feared they would have to enter lives of prostitution or slavery to survive. Nicholas, who had a large inherited fortune, heard of the poor family. He went secretly to the nobleman’s house at night where, as he stood outside watching, a moonbeam shone directly into an open window. He threw through the window a bag of gold, which fell at the father’s feet, providing a dowry for the oldest daughter. Nicholas repeated his act of charity a second night, and then a third, at which time the father, curious as to his secret benefactor, discovered the bishop. Nicholas swore the father to secrecy. This legend is the basis for the custom of placing gifts or gold coins in the shoes, stockings, or baskets of children during the night before the feast of St. Nicholas.

The second legend tells of an Asian gentleman who sent his two sons to be educated in Athens, and who instructed them to stop on their way to receive a blessing from the bishop Nicholas. The boys arrived in Myra at evening and decided to stay overnight at an inn. During the night, the innkeeper murdered the boys and cut their bodies into pieces, which he hid in a pickling tub. Nicholas, warned of the gory event in a vision, went quickly to the inn, where he charged the innkeeper with the crime. The man confessed to Nicholas and took him to the tub where the remains were hidden. There, as the bishop prayed, the boys’ bodies were miraculously restored to wholeness, and they rose up living from the tub and fell at the feet of the bishop. Nicholas refused their thanks, telling them instead to give glory to God who had done the miracle. He then blessed them and sent them on their way. This vivid illustration of St. Nicholas’s protection of children is often depicted in art showing him, in his episcopal robes, standing beside a tub of naked children.

Perhaps no saint has remained as consistently popular as Nicholas, who has been revered throughout Europe as the patron saint of virgins, children, sailors, and a host of others including scholars, clerks, and robbers. His feast day is an important festival in many places and nearly universally associated with gift-giving, but it is from the Dutch celebration that we in the U.S. draw much of our Santa tradition.

In the Netherlands, St. Nicholas arrives in Amsterdam from Spain by ship three weeks before his feast day. He leads a parade to the city’s main square, where he is greeted by the royal family and talks over the children’s behavior during the year with the mayor. Zwarte Piet, or “Black Peter,” accompanies him. This stern character carries a big red book, in which reports on the children are kept, and he is said to carry birch rods to punish the bad children and even to stuff the naughtiest into his bag to be carried back to Spain for punishment.

St. Nicholas Eve is greeted with festive family dinners, after which Sinterklaas himself often makes a personal appearance. He may toss candies and toys through the door, or come in with Zwarte Piet to give a mock lecture on good behavior and to open his bag of sweets to the children.

Later that night, Nicholas takes to the skies on a white horse, on which he is said to jump from roof to roof and down the chimney of each house. There he finds children’s shoes or baskets filled with hay for his horse. He exchanges the hay for candy and toys and gold chocolate coins. Early on the morning of the sixth, children awake to search eagerly for their baskets (which Sinterklaas takes delight in hiding) and to enjoy the treasures the good saint has left.

Early Dutch settlers in America brought their beloved Sinterklaas with them, where he eventually evolved into the cultural (rather than Christian) symbol we know today. Reviving the festival of St. Nicholas on December 6 may be one way to retain the fun and generosity of gift-giving without eclipsing the birth of Jesus on Christmas Day.

Follow the Dutch tradition of eating a festive dinner with family or friends December 5, St. Nicholas Eve. Tell the story of the saint’s habit of secret giving and care for the poor. If the group is large enough to accommodate a disappearance, include a personal visit from St. Nicholas in his bishop’s robe and mitre. He could give a mock lecture on good behavior, or he could remember with the children (of all ages) some of their times of triumph or struggle with their behavior in the year past. He then produces treats and the traditional gold chocolate coins from his sack to pass out or scatter on the floor.

Encourage self-reflection and the growth of conscience in older children by making a St. Nicholas Calendar with them. This calendar extends only from the beginning of Advent to December 6 and is a simple large grid with boxes for each day. The children may decorate the edges with anything having to do with St. Nicholas. They then color in each day’s square as the days pass, using their favorite color to indicate “good” events in each day, and their least favorite for the “bad.” Parents can help by encouraging children to talk about why they used the colors as they did, and about what helps make a day “good.”

Since our stocking-hanging ritual comes directly from the St. Nicholas tradition, consider moving it to St. Nicholas Eve. You will be providing a welcome foretaste of Christmas to come as you return significance to the act of small, simple giving. Let everyone into the fun of being St. Nicholas to each other by buying or making small presents for each other that you take turns “secretly” placing in the stockings after bedtime.

Bake holiday treats early and freeze them. Then, celebrate a visit from St. Nicholas with a special breakfast the morning of the sixth. Include on your table a sample of each kind of cookie for each person. Use your imagination and the time available to plan as festive or as simple a celebration as you like. Keep the remaining cookies frozen until Christmas Day and serve them throughout the twelve days of Christmas instead of during Advent.

Begin a tradition of anonymous gift-giving in your family by watching for ways each can help the others secretly during Advent. Be St. Nicholases to each other with small gifts or notes of appreciation or encouragement or by making a dreaded chore magically disappear.

Hold a St. Nicholas Eve celebration for the whole church family. Meet for a festive potluck, catered dinner, or dessert, then tell the story of St. Nicholas or one of the legends of his life in story, drama, or puppetry. Climax the evening with a visit from St. Nicholas, who first speaks to the children regarding their behavior, then empties his bag of treats among them.

Involve young people’s groups in the practice of secret giving by discovering needs in the congregation or community and working to fill them as a group. Then dispatch the young people in pairs to deliver the gifts secretly, so that the recipients do not know who the giver is. Or try an Advent version of the “Secret Pal” game with an adult study or fellowship group. Each member puts a paper with her or his name into a basket, which is then passed around so that each member can draw out a name. Each person then gives a small gift of some symbolic value or performs an act of kindness sometime during Advent for the person whose name she or he drew. Unlike the standard secret pal game, however, the givers in the St. Nicholas game are not necessarily revealed, and giver and receiver may experience the joys (and perhaps discomforts) of a truly free gift.

Many women’s groups already have cookie exchanges, in which each member bakes one type of cookie, and everyone has a chance to build a tray from all the different varieties to take home. This tradition, already a blessing for the many women who are unhappy with the time and expense of elaborate holiday baking, can be a spark that encourages families to celebrate St. Nicholas Day in their homes. Hold the cookie exchange December 3 or 4 and send each woman home with an explanation of the St. Nicholas tradition and one or two suggestions for a simple home celebration. The cookies, of course, provide the treats.

* Most of these ideas have been borrowed or adapted from To Dance With God, by Gertrude Mueller Nelson (New York/Mahwah: Paulist Press, 1986), which is highly recommended for further reading.

1. Visit the St. Nicholas Center website to get even more information about who St. Nicholas is and what you can do.

2. During a St. Nicholas celebration, invite the children to make gifts for others and wrap them. Make a calendar or potpourri bags. To make wrapping paper, decorate plain white shelf paper/mural paper with rubber stamp designs, sponge painting, or your own drawings.

3. Decorate a wooden shoe(s) using paint markers (available at craft or art stores). Woodburn names on the shoes. Wooden shoes are available from Dutch Village in Holland, Michigan. Children set out their shoe(s) on St. Nicholas Eve (December 5), while children are asleep parents fill the shoe(s) with small gifts or candy, and when children awaken on St. Nicholas Day, they will be delighted with the treats from St. Nicholas.

4. Make letter cookies from a simple sugar cookie recipe. Shape the dough like the first letter of the child’s or adult’s name. Bake the cookies and enjoy them as a snack on St. Nicholas Eve.

THE SONG OF ST. NICHOLAS

(Sung to the tune of “Jolly Old St. Nicholas”) 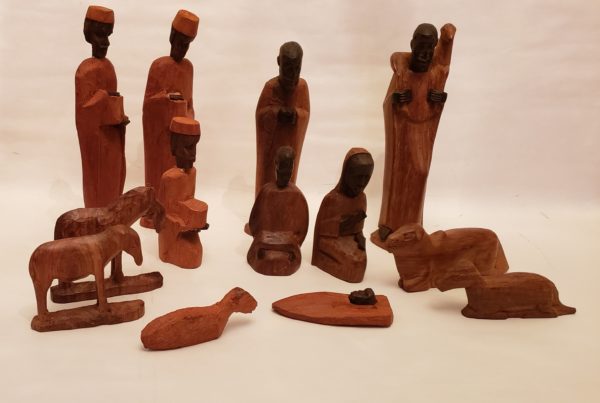 Why I Love Nativities: They Are Reminders of the Incarnation 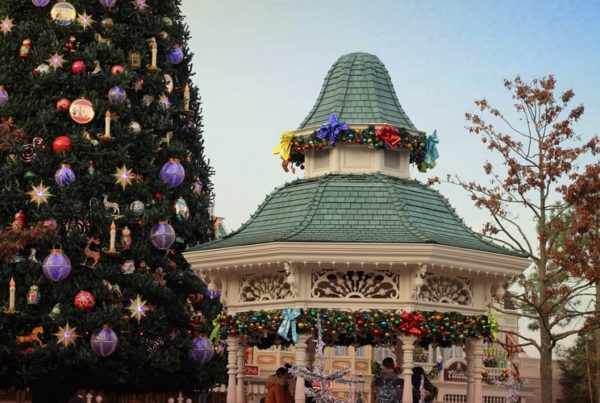 Celebrate Christmas at Home with One of These Global Traditions 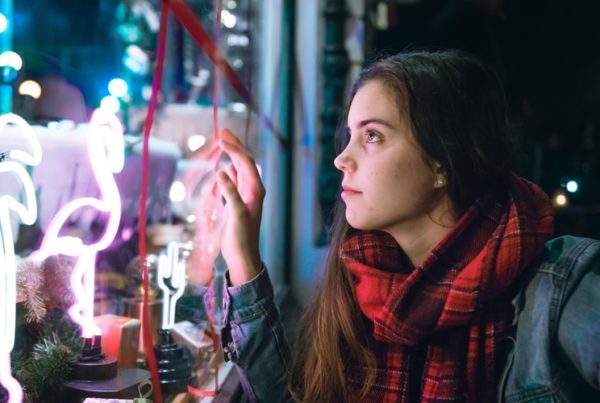 I Asked Santa for a Bicycle, but God Gave a Better Gift