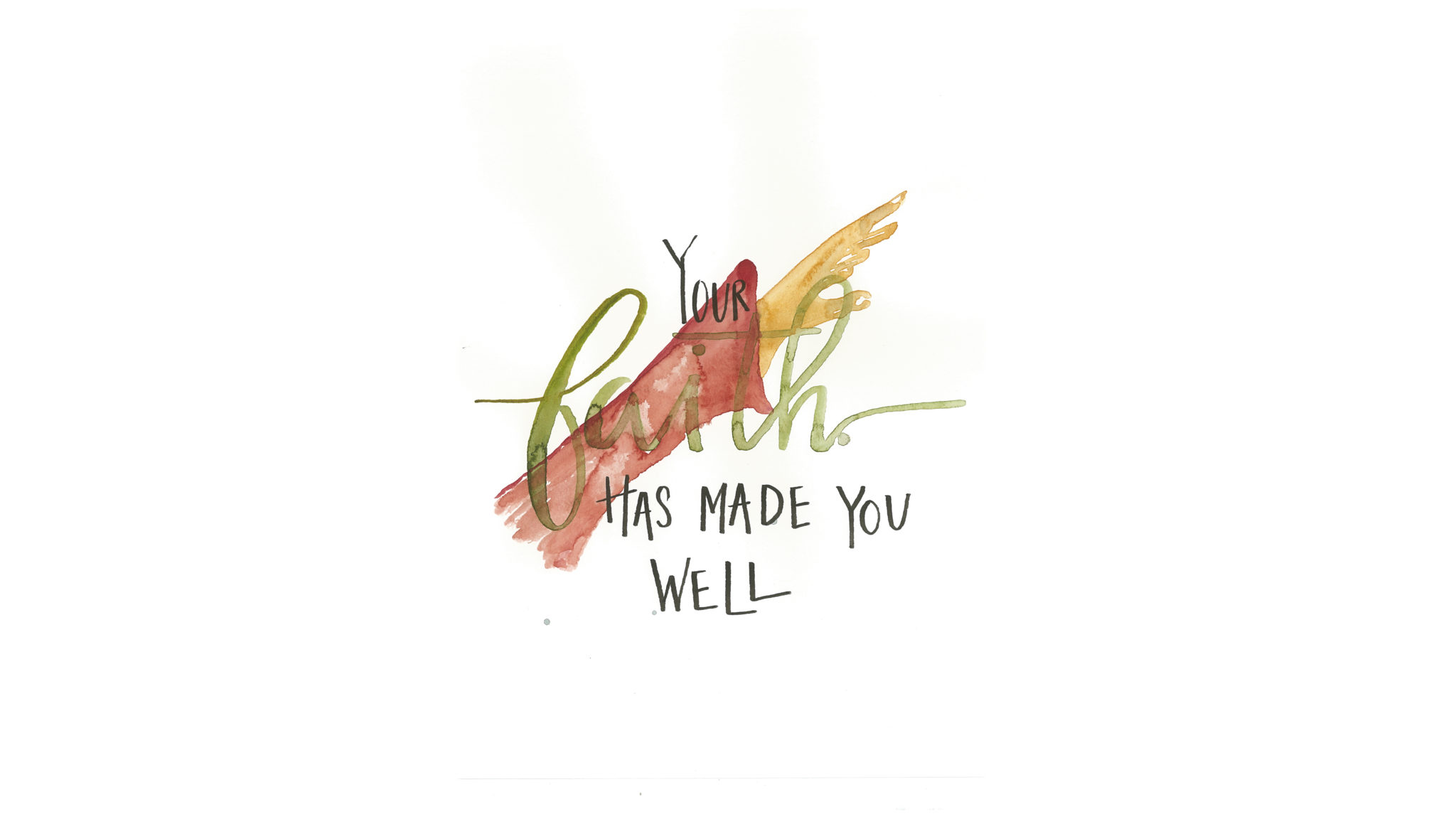 The Woman Who Bled for 12 Years

When you feel outcast or in need of healing, cry out to Jesus. The woman with the issue of blood did in Luke 8. As her story shows, Jesus meets us where we are and reminds us of our beloved-ness.

God, Son, and Holy Spirit, meet us in this space, whatever space we find ourselves in. Trinity, help us to learn more about who you are through this woman. Help us to see your image in the image bearer we find in this story. Help us to sympathize, grow, and lean into her story. Give us wisdom and gentleness with ourselves today. In your name we pray, amen.

“Now there was a woman who had been suffering from hemorrhages for twelve years; and though she had spent all she had on physicians, no one could cure her. She came up behind Jesus and touched the fringe of his clothes, and immediately her hemorrhage stopped. Then Jesus asked, ‘Who touched me?’ When all denied it, Peter said, ‘Master, the crowds surround you and press in on you.’ But Jesus said, ‘Someone touched me; for I noticed that power had gone out from me.’ When the woman saw that she could not remain hidden, she came trembling; and falling down before him, she declared in the presence of all the people why she had touched him, and how she had been immediately healed. He said to her, ‘Daughter, your faith has made you well; go in peace.’”

Introduction to the Woman with the Issue of Blood

The unnamed woman in this Gospel story is a woman who has suffered for 12 years from a certain kind of bleeding; it is often translated as “hemorrhaging.” She has visited many doctors and healers, and none of them has been able to heal her. It seems frenetic and like she is acting out in a last ditch effort. Her very presence in a large crowd would be frowned upon in this society because she is considered “unclean.” Her normal existence would often have been spent watching people skirt around her to avoid the possibility of contact. No brushing or touching or sharing friendly gestures on the path. She lived in isolation and would have been known for her uncleanliness.

To give a little background and context, this story of the woman with the issue of blood is found in three of the gospel texts. For a different angle to this story, let’s detour to Mark’s gospel. In the Gospel of Mark, the writer gives us a richer understanding of Jesus’s capacity to love by using a particular literary method and another precious story of healing. The method is what some scholars affectionately call a “Markan Sandwich.” The structure is: A1 – B – A2. The larger story begins (“A1”) with Jesus being abruptly greeted by a synagogue leader, Jairus, who falls at Jesus’s feet imploring him to heal his little daughter who is at the point of death. In the “sandwich” story (“B”), a large crowd is gathering around Jesus and is pressing in on many sides. From this large crowd, our woman enters the scene by touching the hem of Jesus’s cloak. She is healed. Power leaves Jesus. We’ll return to this. Then we return to the original story (“A2”) as Jesus is swept away to the home of Jairus and is told that his daughter has died. But, Jesus tells the girl, “Talitha cum,” which is Aramaic for “Little girl, get up!” Immediately, the girl gets up and walks around.

There are some lovely things that weave these stories together and enhance the sandwiched story of our study. There are so many delightful connections between the two stories. Some are pointed out by biblical scholar Beverly Zink-Sawyer, who observes:

Both victims of illness are female and ritually unclean, one as a result of death and one as a result of hemorrhage; both represent the significance of the number twelve in Jewish tradition (the twelve years of hemorrhage and the twelve-year-old girl); and both are regarded as “daughters” (the little girl being Jairus’s daughter and the woman who is addressed by Jesus as “Daughter”). An act of touch restores both women to new life even as those surrounding them lack understanding.[1]

Immediately, we can notice the biblical significance with the number 12 that has connections all over the place. For these women, 12 years of bleeding and 12 years of age. We also can see that these two feminine characters are unnamed by society, but then beautifully placed by Jesus when he refers to both of them as “daughter.” A sweet, intimate naming that is so needed by both of these women. Another intimate moment is the act of touch seen in both stories.

Women know what it’s like to bleed. Men do too, of course, but women have a cleansing of sorts that happens every month. We lose a part of our body every month and it is a painful, centering, mindful, difficult time. Even from biblical times, the idea of having blood outside of the body has been considered unclean or dirty. I find it unfortunate that the blood that is shed by women routinely for the sake of giving life has been shamed throughout history, while the blood shed by men in battle—in the act of taking life—is honored. Women, simply by having a body that works, were considered unclean and cast out routinely. This unnamed woman, whose story the text brings to light, not only suffered from continuous bleeding for many years, but also that dirty, unclean feeling resulting from being stigmatized and isolated. Hers was a continual existence of pain and being cast out. Jesus meets her in this space—or, rather, is met by her—and does the opposite of what is expected. Instead of being repulsed or disgusted by her, he responds with peace. He responds with acceptance and grace. He seems to respond with understanding. He calls her daughter. He accepts her. He offers her peace and heals her.

This bleeding woman’s story interacts with all of our stories because we, like her, have been in need of healing at some point or another. We have been outcasts or have felt abandoned by our communities or our friends. We have been in need of a merciful touch by God and by the body of Christ incarnate in our sisters and brothers here with us. Think of a time when you felt like you were at your end. Think of that space and ask God to show you where Jesus was in that space. What was he like? What did he refer to you as?

These stories are not telling us that we will always be healed, but rather, what it looks like to reach out to Jesus in times of pain and heartache, isolation and loneliness, in order to receive the gift of truth: you are beloved and known intimately by your creator.

Michael Lindvall puts it this way in his reflection on the passage:

One personal affirmation in this biblical story is that, beyond even physical healing, acceptance, intimacy, and touch can make us whole and give us peace. We are, in fact, shaped and made human in relationship to other persons. Our relationships—in the church, in friendships, and in marriage—are not just something extra added on to life for distraction and entertainment, as if we would be complete human beings in individual isolation. Relationship, “touch” if you will, makes us human and whole.[2]

Know that you are beloved and known by God. Healing does not always look exactly like what we are hoping for, but sometimes healing looks like acceptance, belonging, and connection. Sometimes healing looks like not letting fear have a hold in your life. Love looks like a touch from a friend or loved one in a moment of shame, hopelessness, or deep pain to draw us out and remind us that we are loved and called children of God.

Reach out and touch the robe of Jesus today and ask for the reminder, the grace, and the knowing that comes from him. Let Christ find you wherever you are and meet you there—at your lowest lows and your highest heights. Remember that you too are the hands of Christ and have the ability to offer healing to those who are suffering. Ask for wisdom and pray for strength and courage this day.

Rev. Alisha Riepma serves as the pastor of St. John’s Reformed Church in Red Hook, New York. She is passionate about youth, equity, and justice, looking to the church to lead the way in a revolutionary way of being in the world today. She is a member of the Women’s Transformation and Leadership Guiding Coalition.