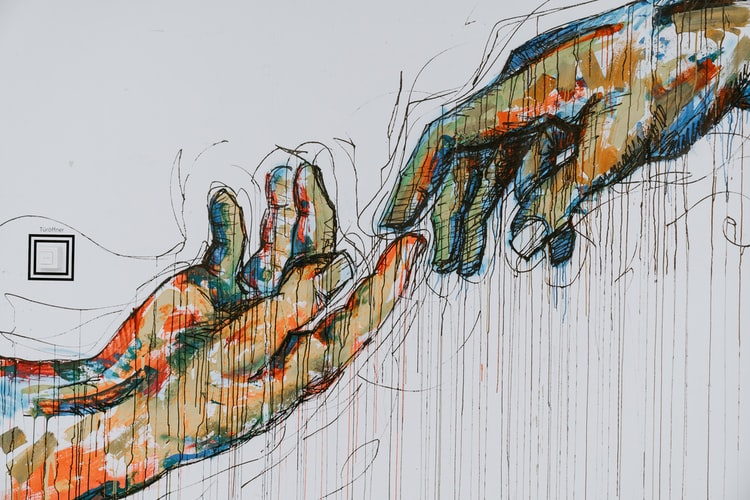 By Justin MeyersNovember 25, 2020No Comments

For the last seven-plus years, I have called Oman home in the Middle East. If I had to say what I do here in one sentence, it would be this: I am a very public Christian in the middle of a Muslim majority country and region. More fully, I do this by working with people of different faith traditions from around the globe to build peace and trust between them. They are often from different cultures, beliefs, and traditions.

Standing in the middle

In all this, I feel that my call is to stand in the middle. My call, my mission, and the work of the Al Amana Centre, the organization I work for in Oman, is to be with people who believe differently than we do and who often are very different from each other.

So often, we think that to be in the middle means to be moderate, or that in order to mediate, we need to soften our beliefs. That is not my experience. While the term the “moderate middle” is fairly common, being in the middle does not necessarily equal moderate. We can be in the middle and hold deeply held convictions. It means that while we hold onto our convictions, we need to remain in contact with people on both sides of the conflict and help bridge the gaps between them with the love of Christ. We are called to take up our cross and follow Jesus into the middle of the hurt, pain, and conflict of the world and show them that there is another way than violence, separation, and despair. This is my experience, and my conviction, as a Christian, as a pastor, and as a peacebuilder.

The example of Jesus

Jesus was not a moderate. He taught as one with authority and held strong convictions—convictions that led him to the cross. Even so, he stood in the middle:

In all these things, he was in the middle, connected to those on all sides and around him. And in death, he was the light that shone in the middle of the darkest place.

If we are to take up our cross and follow Jesus, I believe that we, too, are called to be in the middle, between the poles of this world: between religious poles, political poles, economic poles, and more. But that does not mean we are moderates or necessarily need to moderate our beliefs and convictions.

Jesus said, “Blessed are the peacemakers, for they will be called children of God.” I think that means standing in the middle, holding convictions, but remaining connected to all people around you in such a way that the love of God is shown to all who see.

How do we start the work of peacemaking?

In Oman, you can believe whatever you want to believe. You can express those beliefs and you can disagree with others, but when you disparage, diminish, or ridicule someone else’s beliefs of views, that is where the line is crossed. Oman is one of the most peaceful countries in the world, in large part because this is not just the law, but the long held practice of the Omani people.

So much of our work is asking questions. What do you believe? Why? What difference does it make? We can’t listen to find a weakness in an argument or a theology if we truly want to hear what the other person is saying. Much of the work of peacebuilding and conflict management is asking the question, “Did you understand what was just said? If not, let’s find a way to help you understand each other.”

Lew Scudder, long serving missionary and historian of the Arabian Mission, writes in The Arabian Mission’s Story that over the 100-plus years of the mission, most of the missionaries had moved from a crusader’s mind and found liberation in adopting a crucified mind, or the mind of Christ. This means that instead of trying to conquer, destroy, win over the other, we seek to serve them. It is an attitude of love and service, not dominion. It is not about winning over the other; instead, it is about walking alongside and living with and among them.

If we do the first three items well, chances are high that the people we are engaging will ask about us. We will then be in the position to return the favor and allow them to be able to hear from us and understand our faith, belief, or tradition. When this happens, there is mutual understanding. While we might not change anyone’s views, we can at least begin to understand each other, trust each other, and see each other as children of God.

“I feel that you understood.”

One of my personal highlights in ministry was a couple of summers ago when I was visiting a church in middle America—farmland with little more than corn as far as the eye could see. I was staying the night with a very generous couple, and as we ate dinner, I asked about their church, their community, their joys, and their struggles. We talked about politics, our faith, Islam, and immigration. I was curious about them and their lives; they were curious about mine. I didn’t disparage their religious or political beliefs, even though it became clear that we had different views on some very contentious subjects. We listened to each other, and we sought to understand.

At the conclusion of the dinner, my hostess said to me, “I can tell that we don’t agree on some things and that we likely have different politics than each other, but I feel that you understand our point of view and I didn’t think that was possible.”

This is just the start. In peacemaking, and in life, there is a need for justice, repentance, and forgiveness. Just because you listen does not mean you agree, and it does not mean that things do not need to change. It just means that you are doing the hard work of standing in the middle. And it is from the middle, listening, living, working with, and loving people on all sides that changes will start to manifest in our communities.

Rev. Justin Meyers is the executive director of Al Amana Centre in Muscat, Sultanate of Oman. While most of the work of Al Amana Centre is in the Middle East and African contexts, Justin is available to consult with churches in the U.S. on interfaith and peacebuilding initiatives. He can be contacted at jmeyers@alamanacentre.org.

Why Is There a Generation Missing from Church?