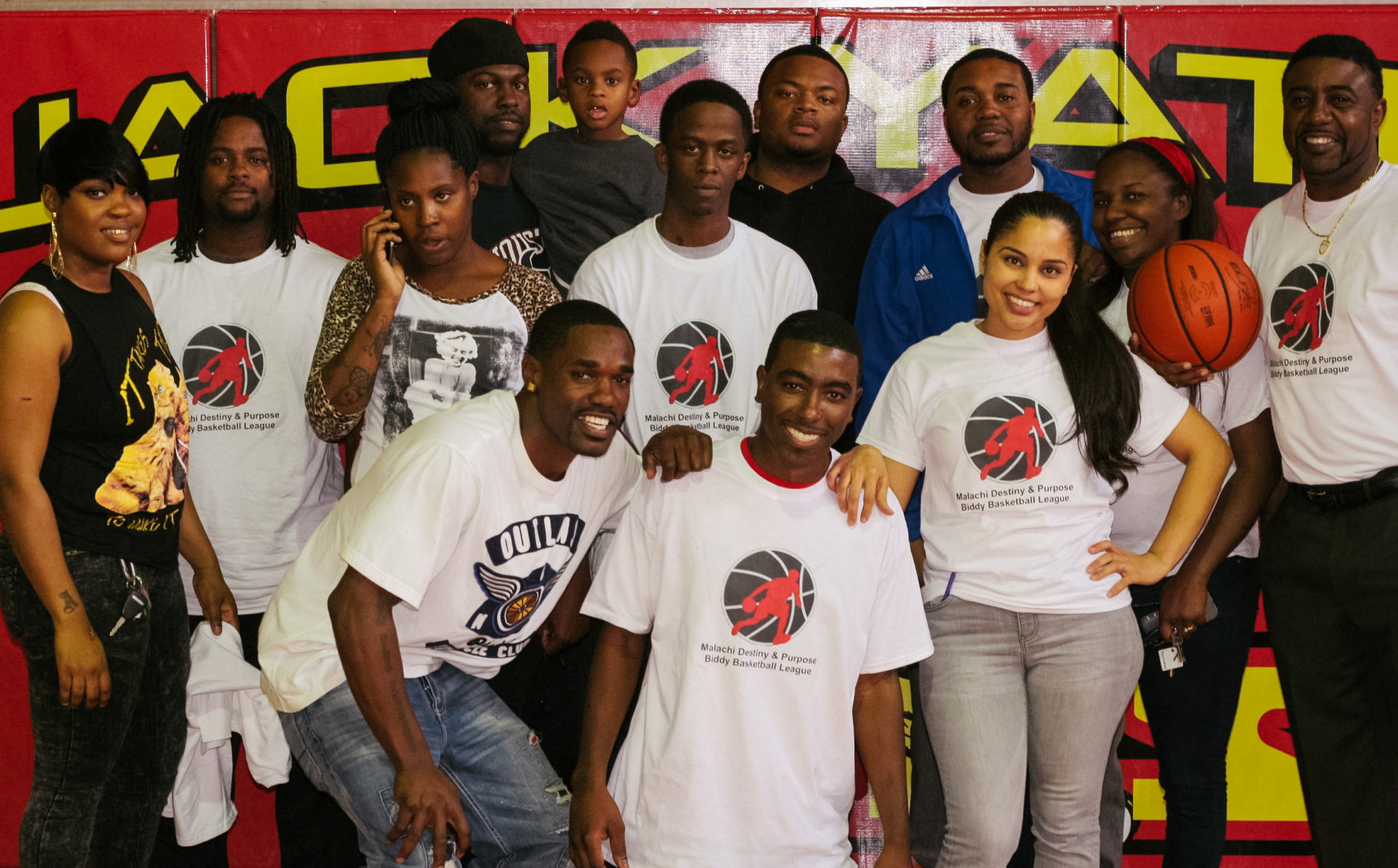 By Becky GetzOctober 14, 2019No Comments

I n 1992, Prince Couisnard and his wife, Sheila, moved out of their suburban townhouse and rented a house in the inner city of Houston, Texas, for $300. Previously owned by a drug dealer, the house had been confiscated by the government. It was located in Houston’s Third Ward, which, 26 years later, would appear on a list of the top 25 most dangerous neighborhoods in the United States.

This setting became their place of ministry, and it’s been all about relationships from day one.

“We started out with a passion to just see kids have a relationship with the Lord. A lot of the kids we were serving weren’t going to church; they didn’t know the Bible stories,” says Couisnard.

“Drugs were rampant in the community. The system was locking up a lot of males. There was a fallen generation out there. [The kids] didn’t have anything to really hold on to. So we started to create things for them.”

The beginning was straightforward. The Couisnards invited kids to their house, held Bible studies, and gave them punch and cookies.

“But nothing was really real about that,” says Couisnard. “It was just taming the crowds.”

Frustration followed. The Couisnards wanted to make a real difference in the lives of these kids and in their community. For effective ministry and transformation, the couple needed to learn how to “operate in the inner city mind,” Couisnard says.

He attended several community meetings; there, he found only two males among the 30 people in attendance. At the low-income apartment complex, he saw kids on the monkey bars, the only thing they had aside from the basketball courts where they shot hoops. On these courts, he witnessed teenagers enlisting the younger kids to sell drugs—and the kids really looked up to these guys, Couisnard says.

“I said, ‘No, it’s not supposed to be like this,’” he recalls. “I felt the Lord was really calling us to intervene. … God began to reveal to us that the harvest was plentiful, but the laborers were few.”

The Couisnards went to the school system, which was full of kids and in need of volunteers. They got involved and headed up the parent–teacher association. When people got into conflicts, the principal would tell them to go see Mr. Prince and Ms. Sheila.

These relationships laid the groundwork for ministry. Seeds of transformation were planted in the community.

The harvest began on the basketball courts. Couisnard sought out the biggest drug lord and the others on the court. Couisnard’s status as a preacher commanded their respect. Over time, the courts became grounds for trust and friendship.

Through basketball and relationships, a ministry was born. Inner City Youth was for the younger kids, with the older ones serving as coaches, as referees, and in other leadership positions.

“We used every possible angle [for ministry] that we could use. We had athletics in our blood,” says Couisnard, who played professional baseball with the Philadelphia Phillies. “Sports was our net.”

The Couisnards started a basketball league in the community, followed by a community football league, complete with sideline cheerleading and uniforms for all. These added programs were just part of the growth as the ministry expanded from one community in the Third Ward into the greater Houston area. The Couisnards were soon reaching about 300 kids through sports. 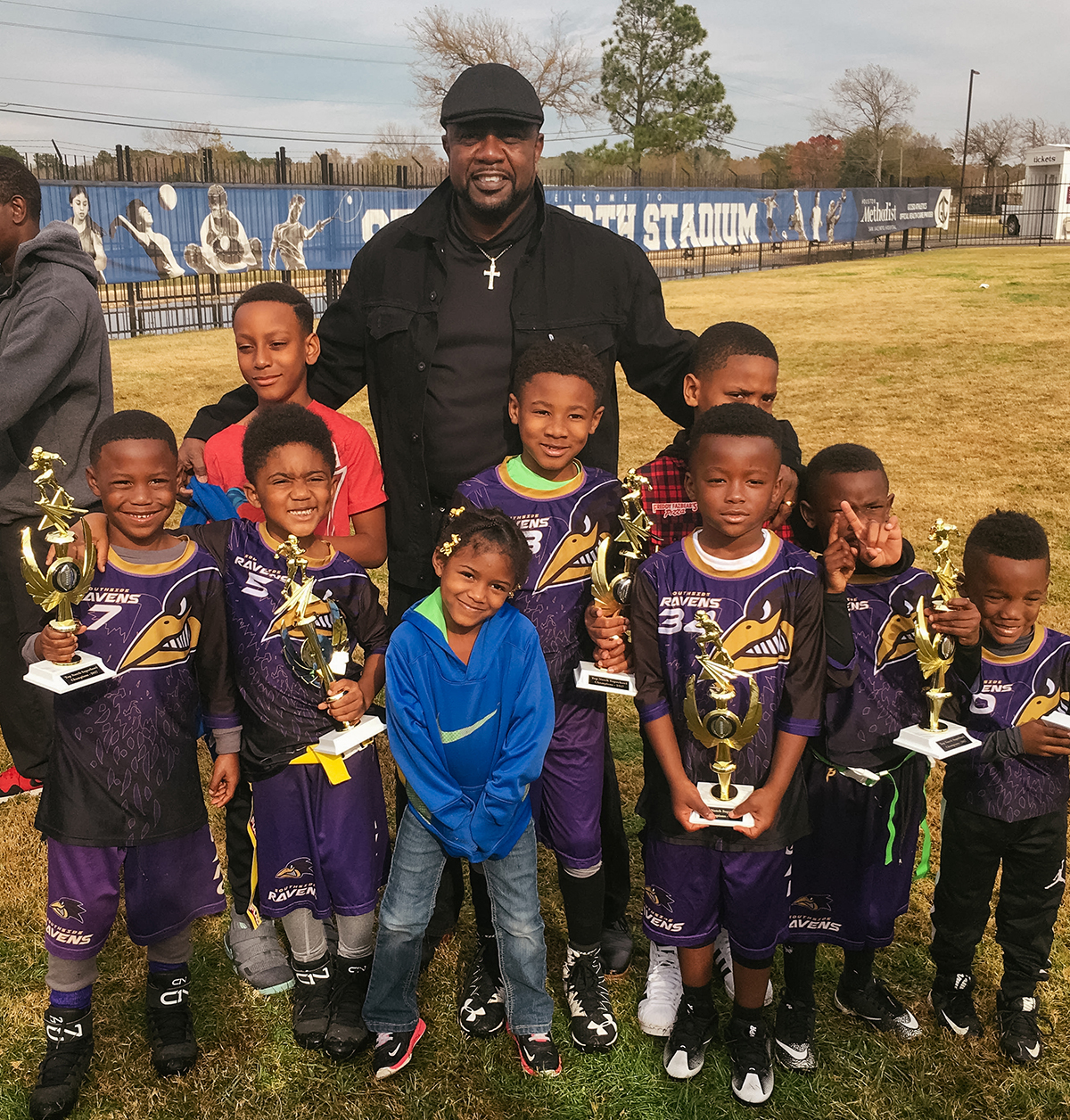 Prince and his young football team celebrate their win.

With their basketball and football teams, the kids learned about leadership. Teenagers grew into the leadership roles entrusted to them, says Couisnard.

“We did hands-on,” he says of the model they incorporated into the leagues for 20 years.

When Inner City Youth started a summer leadership program, kids were given leadership experiences off the field and the court. The program’s first year included 12 attendees, who lived with the Couisnards six days of the week. By the time the program ended years later, it had expanded to 60 kids, all staying with the Couisnards for the whole summer.

The Couisnards’ commitment to mission in their community meant building programs specific to their context in the inner city, including programs for children whose parents had been murdered.

Adults got involved, too, both as administrators for these programs and as recipients of leadership trainings. Leadership development opportunities for congregations, ministry staff, and volunteers taught attendees how to “skillfully handle the Word of God” and how to teach it, says Couisnard.

For Couisnard, skillfully handling the Word of God meant taking it to other people, too. Thus, leadership trainings provided framework and hands-on practice for such conversations.

Reaching out in a big way

The leagues and programs thrived for two decades, leading the Couisnards to found an off-shoot ministry in 2012, which continues today. Like Inner City Youth, Malachi Destiny and Purpose is relationship based and aims to transform Houston neighborhoods.

The ministry reaches out to teenagers, young adults, and families, providing them with the hope of Christ to help them overcome past and present trials such as poverty, broken relationships, and abuse. All of this transforming work is framed by belief in redemption.

“Leading people to freedom through God’s redemptive work is one of our core values,” says Couisnard. “We believe this comes through a specific focus on biblically restoring the family.”

Malachi Destiny and Purpose works toward spiritual, economic, and educational development in the Third Ward. The programs are mission-centered, helping “youth and families grow in Christ so they can know our Lord and be a beacon of light in their homes and neighborhoods,” reads the website.

“Participants are introduced to a loving relationship with God,” says Couisnard. “It is through relationship that they understand who God is and who they are in Christ.” 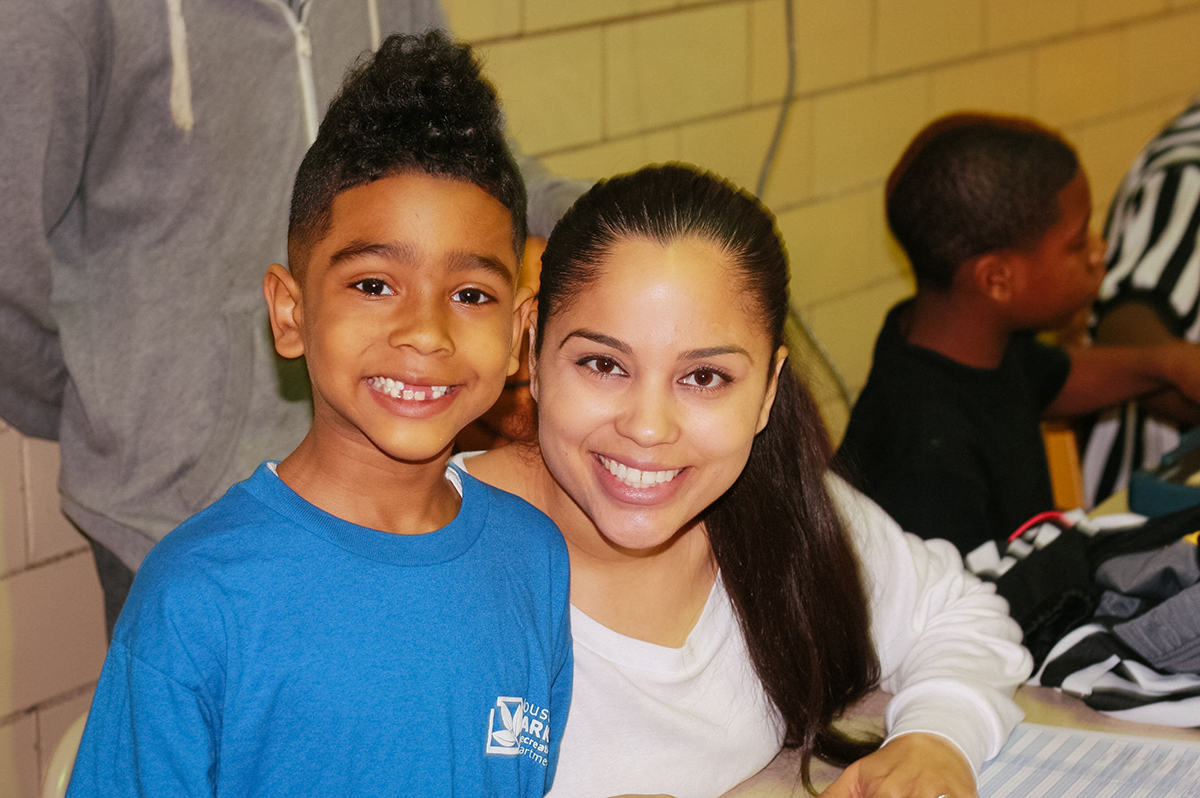 Stephanie Torrez Square, once mentored by the Couisnards, is now a high school principal.

Malachi Destiny and Purpose has blossomed and grown in a big way. Volunteers, donations, and partnership organizations have helped it become a ministry serving nearly 300 families and raising hundreds of thousands of dollars.

Despite the size of the ministry, it has always been about reaching and serving the community.

“We want to serve our people—the families with whom we have established biblical relationship through our discipleship and leadership commitments,” Couisnard says. “It’s not about numbers but about relationships with not only kids but also their parents.”

As Malachi Destiny and Purpose continued to grow, the Couisnards sought another way to serve their neighbors and transform their inner city community. They found their answer through an old friend.

“When I first started in ministry, Tony Campbell was the first one to allow us to come in and do football leagues and do our leadership programs in the summer,” says Couisnard. “I was just bringing kids from the inner city. He opened up the church—and it was a fight for him to bring those kids in.

“But he said, ‘They need the gospel, just like everyone else.’”

That friendship, determination, and heart for mission and discipleship propelled Couisnard, who had previously pastored a church, to plant another one. Campbell, who served the Reformed Church in America as director of mission engagement for several years until his death in 2017, connected Couisnard with the denomination.

“We believe that believers must be disciples. Therefore, establishing strong Christ-like relationships through fellowship, worship, and the words of our Savior and King—and developing leaders to expand God’s mission—is vital to our success,” he says. “Our focus involves knowing Christ intimately. That is not through a system or a weekly routine, but [through] Christ revealing himself and living through his people daily.” 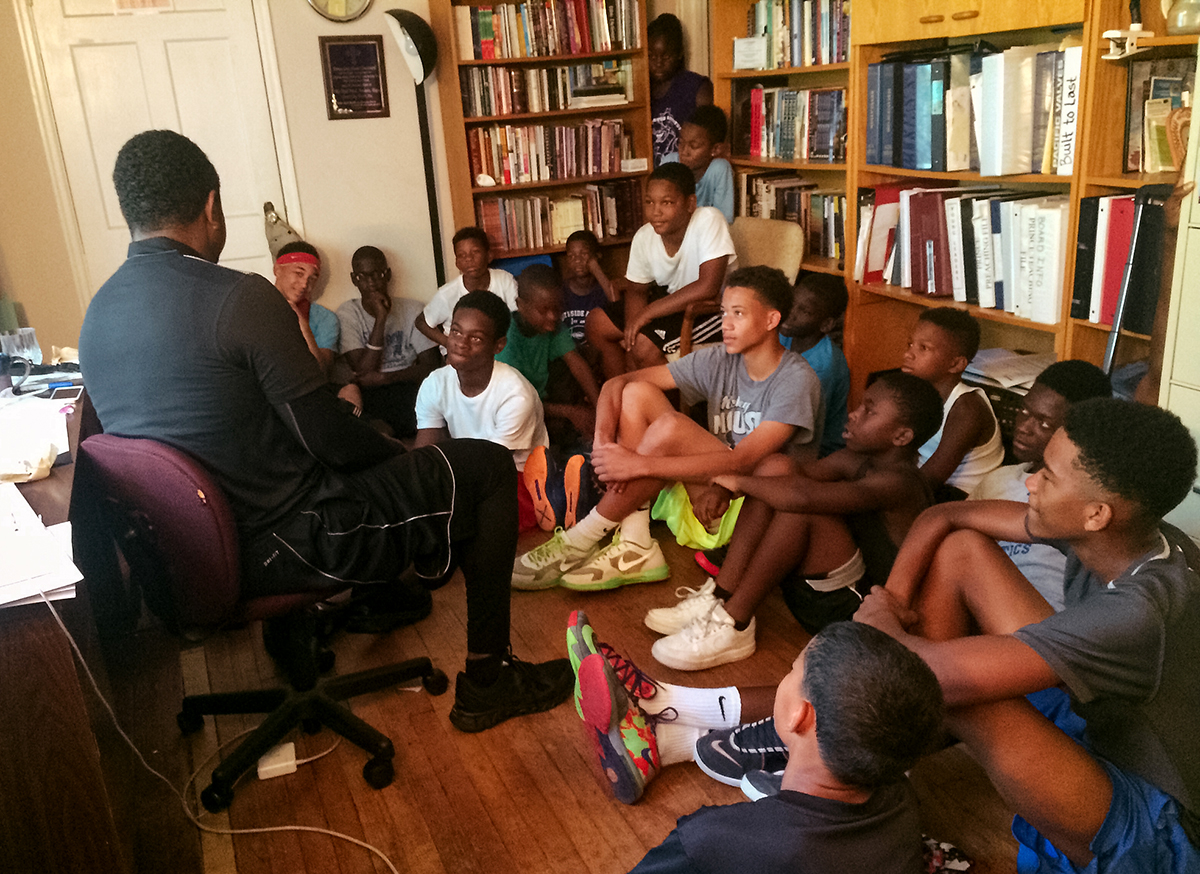 Bible studies have been an essential part of the Couisnards’ mission.

Church in the inner city was not without complications. Many parents worked in the evenings and on the weekends, so traditional and consistent meeting times were not options for Christ the Redeemer Community.

“Church has to look different for us,” says Couisnard. “We have to use the opportunities God graces us with [as we] deal with the unique strains on inner city families.”

Interruptions during services or Bible studies were common due to the large number of kids needing either to be held or fed. Couisnard says he’d often preach with an infant in his hands or stop to pick up a toddler.

In the neighborhood, gang violence and murders caused Couisnard to reassess what he was doing. Now, four years later, there are no regular services, but he meets with people one-on-one or one-on-three. Those relationships remain the primary field for discipleship and leadership development.

“We do a lot of things together, but we have our seasons,” explains Couisnard. “We’re highly relational. We do more than just ministering and teaching. … It’s about having Jesus in our hearts.”

Seeing the return on investment

The Couisnards have found opportunities for ministry in the simplicity of relationships. It’s a significant avenue in the inner city setting, where, as Couisnard has noted, good role models are often few and far between. For 25 years, through their various ministries, it has been the Couisnards’ mission to change that narrative.

“The amount of time we spend with these kids begins to change their lives,” says Couisnard. “You’re teaching kids all kinds of things about life. They ask questions that don’t normally come in a church setting. You have a chance to build their life.”

The seeds of those investments, some planted long ago, are evident in the transformation of the kids.

“One plays for the Dallas Cowboys, one for Tampa Bay, and one for the San Diego Chargers. Those are the ones that have the big fans,” says Couisnard. “There’s a lot of them that went to college, got jobs, have families. Some are principals in schools. And, there are those who haven’t done so well or are still struggling. But I like to talk about them all in the same breath.”

Today, the Couisnards are working with their third generation of kids. They’re seeing some of their former kids—now adults—come back to serve as coaches or other volunteers, passing on the baton of leadership they received when they were just kids themselves. 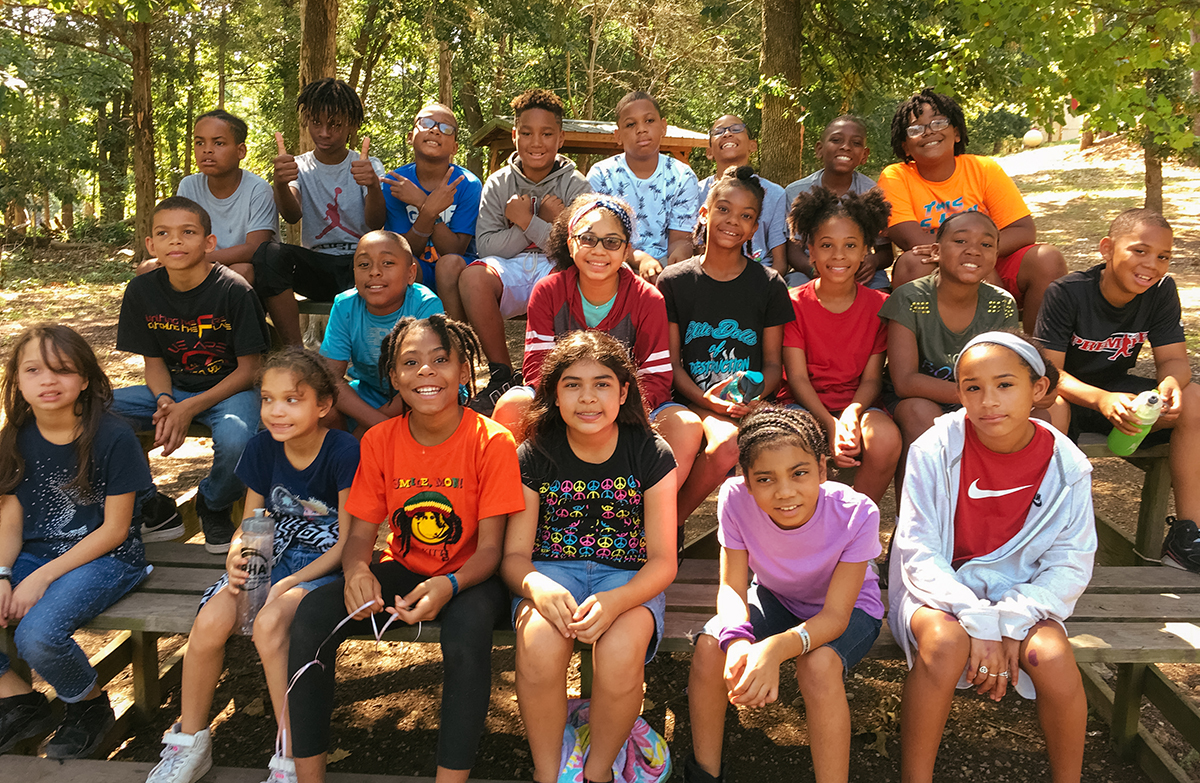 Pictured here is part of the third generation of kids the Couisnards have worked with.

My wife and I have been fortunate to have a dream and to see it come to fruition. We’ve seen our dream realized,” says Couisnard. “We have to praise God for everything that came our way. We went from two monthly supporters to raising millions of dollars and [seeing] hundreds come to know Christ.

Looking back over all these years, Couisnard says God was in total control.

“He led and guided us. That’s why we did what we did—because God was able. … He really is a good and great God. He’s going to see you through; he’s going to be with you. That’s really important for inner city life. It’s not your standard ministry. There’s a lot of poverty, tragedy, and despair. Thank God we can offer hope.”

Becky Getz is a writer and editor for the Reformed Church in America's communication team.

Why Is There a Generation Missing from Church?