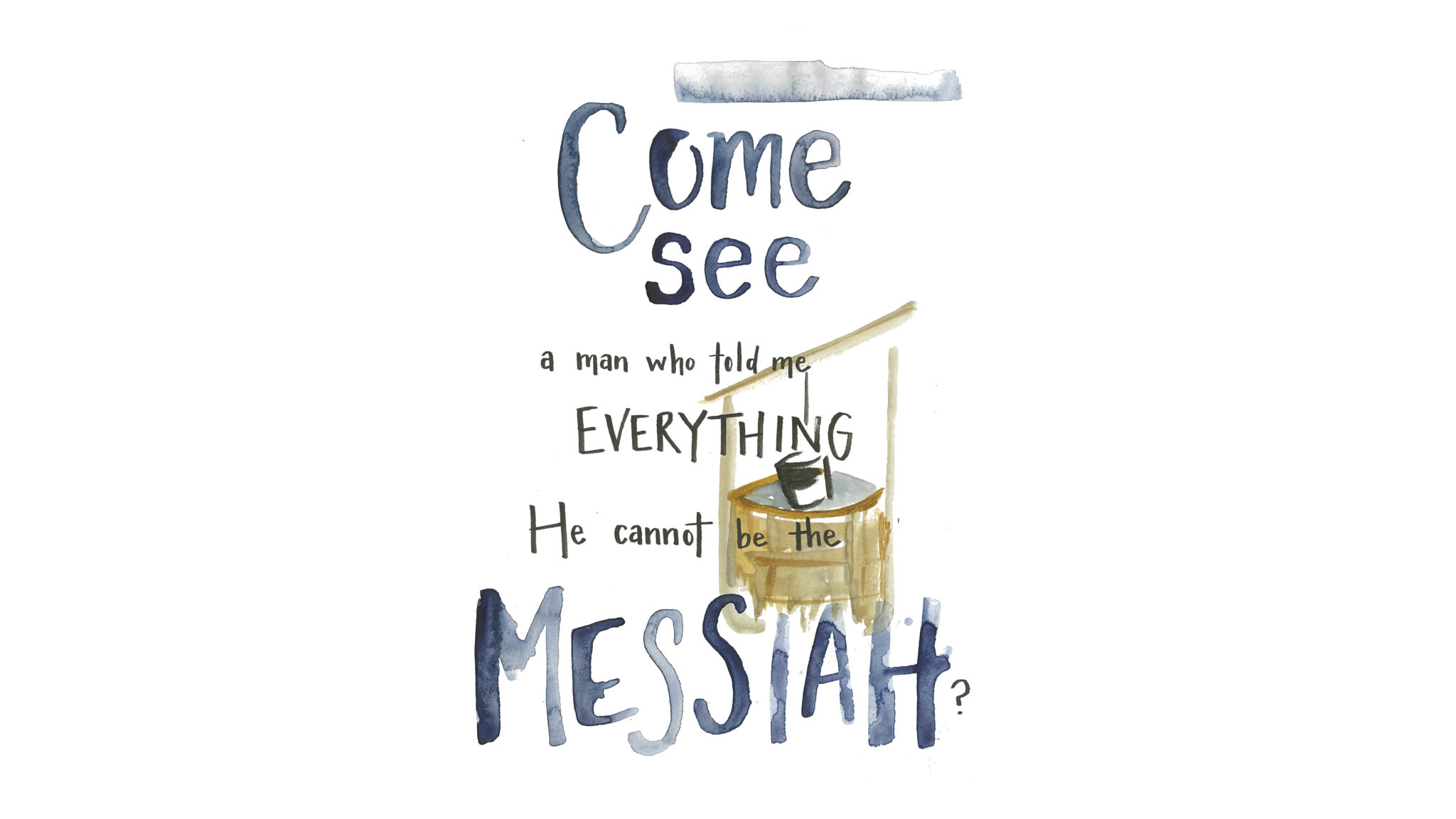 The Samaritan Woman at the Well

The Samaritan woman whom Jesus meets at Jacob’s Well gleans much from her long conversation with Jesus. When she discovers his identity as the Messiah she leaves her water jar, much like the disciples left their nets, and becomes an effective evangelist to her community. This Bible study of John 4 explores what the story of the Samaritan woman at the well can teach us today.

God, you who met the Samaritan woman at the well that day. Meet us in this story from Scripture and in our lives this day. Amen.

Who Was the Samaritan Woman at the Well?

Though we are not told this woman’s name, she has the longest conversation with Jesus of any character in the book of John. Yet, throughout the years she has often been maligned or misunderstood because of her sexual history. This history often colors our reading of this episode, so before diving into the rest of her conversation with Jesus, let’s look at this aspect more closely.

Certainly, five marriages is a high number. But in this time period, it was not unreasonable. Widowhood was a common experience in a culture where women were married very young. Divorce in order to gain a more socially advantageous marriage was also not uncommon, though it is unclear if the Samaritans allowed women to apply for it without a male guardian as the Romans may have. So, it seems most likely that her many marriages were not a result of her choice.[1]

Her current situation, living with a man who is not her husband, could be the result of several possible scenarios. She could be a concubine, which was a legal arrangement but with lesser status than marriage. If the two partners in the relationship were not of equal social status or wanted to avoid inheritance issues, they might choose this option. She could also be a second wife, a role which was also socially acceptable but not considered of the same status as the first wife. Perhaps most importantly, we should notice that Jesus does not condemn her status but simply acknowledges “what you have said is true” (4:18), as he continues to engage her in theological dialogue, to which we now turn.

Jesus meets this Samaritan woman at Jacob’s Well after a morning’s journey and disregards social custom by asking her for a drink. This boundary crossing between a Jew and a Samaritan sparks a conversation about their theological differences. Like all Samaritans, she traces her ancestry back to Jacob. She reveres this place but is curious about this stranger who promises something greater. She has a good grasp on her own tradition’s beliefs, so she asks, “Are you greater than our father Jacob who gave us this well?” (4:12). And yet, she is eager for the eternal abundance Jesus promises.

Jesus promises living water that gives eternal life and invites her to bring the rest of her household—specifically, her husband—to receive the goodness he is offering. This turns the conversation to her personal history and current marital situation. She responds honestly and succinctly, “I have no husband” (4:17). And Jesus affirms that what she has said is true and indicates that he has seen and knows her more fully than she might have guessed. Without judgement, he relays the fuller story of her past, and she immediately understands that he is a prophet who knows and speaks the truth. She decides to take their theological discussion a step further and asks him about the proper place for worship, one of the major differences between Jews and Samaritans. In response, Jesus speaks of a future time when all true worshipers of God will worship not in a particular place but “in the Spirit and in truth” (4:23-24).

Jesus’s mention of the future raises her hopes for the coming Messiah. She speaks of her anticipation of the fuller understanding she will receive when the Messiah comes. In response Jesus declares, “I am he.” In a sudden turn, this woman from whom Jesus earlier asked for a drink, has now found her own thirst for theological understanding quenched. She has met the Messiah, the one she has been hoping for. At that moment, the disciples interrupt their conversation, but she has heard all she needs to hear. She drops her water jar and rushes back to the village and says to everyone she meets, “Come and see a man who told me everything I have ever done. He cannot be the Messiah, can he?” (4:29).

The Samaritan woman listens with open attentiveness to Jesus as she asks him questions about her faith and hope. The longer she talks with him, the more her understanding grows until she sees the full truth: Jesus is the Messiah. Throughout this conversation she demonstrates a posture of discipleship, learning from Jesus, and now she is called as an evangelist. She leaves her water jar behind—just as the disciples left their fishing nets—a sign of her complete embrace of this calling to follow Jesus. She returns to her town and effectively shares her own experience with Jesus, inviting the villagers to come and see if they reach the same conclusion about him. In the end, “Many Samaritans from that city believed in him because of the woman’s testimony” (John 4:39, NRSV).

This woman without a name is a wonderful model for all of us on our own journey of faith. Her actions invite us to stay connected to Jesus and ask questions about our faith in order to come to a fuller understanding of it. She models a way of doing this with both conviction about what she has learned in the past and also openness to discovering new things about what God is doing in the world. But just as our growth in faith is not only for our own benefit, the Samaritan woman takes her new learning and is propelled into action around her calling. She reaches out to her community and invites them to join her on the journey. Whether we feel called to evangelize as she does or we are called to use our gifts in other ways, her story reminds us that our callings are opportunities to turn personal growth in faith into action for the sake of others. This is the movement of all disciples—growing in faith through relationship with Jesus and moving outward to use our gifts for the sake of the world.

Jesus does not judge this woman’s history, though many Christian interpreters have. Instead, through her conversation with Jesus, we discover a model for discipleship that is open to discovering a fuller understanding of God’s action in the world. Through her response to Jesus as an evangelist, we are reminded that being a follower of Jesus calls us to put our gifts into action for the sake of others.

[1] For a more detailed examination of the historical record on women and marriage in this time period and the Samaritan woman’s story in particular see Women in the World of the Earliest Christians by Lynn Cohick (Baker Academic, 2009), 99-128.

Rev. Dustyn Elizabeth Keepers is a Ph.D. candidate in Systematic Theology at Wheaton College Graduate School. Her current research centers on John Calvin, ecclesiology, and feminist theology. Dustyn is also an ordained minister of Word and sacrament in the Reformed Church in America and previously served as a pastor at North Holland Reformed Church in Holland, Michigan.